How the Pope Got Me Fired 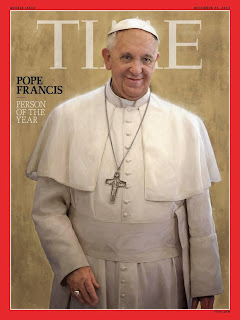 Time Magazine has chosen the Pope as their Person of the Year and the newsflash today might very well read as follows:

"Countless Preachers at Tiny Little Southern Churches Scramble to Prepare their 'Getcher Guns: The Age of the AntiChrist is Upon Us' Sermons for this Sunday."


It's not just the tiny little Southern (Baptist?) churches, though. A lot of Reformed-tradition churches are likely to be thinking the same thing, since many of them base their theology on the Westminster Confession, which explicitly states that the Pope is the Antichrist. And no, I'm not kidding.

I first encountered this belief back in nineteen-dicketty-ninety-nine, when a fellow I tree-planted with told me one day that the Catholic Church was the Whore of Babylon (his words) and that His Holiness did, in fact, have a secret pitchfork and horns (mine). At the time, this seemed to me to be ludicrous to the point of hilarity. Then I got a job teaching at a private, Christian high school that was appended to a large, Presbyterian church -- a church that happened to be one of the many that cherish the Westminster Confession as a defining theological document.

This, in fact, was why I did not at first want the job.

When I had researched the school online, I'd seen that to work there I would have to "sign off" on the Westminster Confession. So I printed the bajillion-page, four-hundred-year-old thing off and read it all the way through. Then I laughed, threw it in the garbage, and walked away.

That job was my last chance that year to be an Art teacher, however, so to avoid another twelve months of serving platters of carbohydrates in a faux-Italian restaurant, I went in for an interview.

They told me that I was allowed by the Presbyterian church to "scruple" certain aspects of the Westminster Confession. So I told them I thought that A. The Pope wasn't the Antichrist, B. Double-Predestination (God picks out some babies to torture for eternity) was reprehensible, and C. The whole notion that you could "know" all this stuff about God and the afterlife and cetera was a bit nuts.

They heard me, but I don't think they really heard me, because they hired me and kept me on through four whole years of slowly-devolving Josh-vs-Administration repartee, in which I was routinely called to the Principal's office to answer for my iniquities (primarily what I was writing on this blog).

Now, don't get me wrong... I was treated very, very well by the school and by the Principal. Given the vast chasm between the official belief-system of the school and my own, creative non-system (Christian Anarchists, Unite!), it is quite astounding that I lasted as long as I did. Eventually, though, they clued in to the fact that I really, really meant what I'd said about the Westminster Confession, and I clued in to the fact that it was disingenuous of me to go on pretending that I wasn't aware of the discrepancy between what I'd said, and what they had heard.

Which is all to say that Ideas have Consequences.

This is why I am thrilled to hear that Time Magazine has chosen the Pope as their "Person of the Year" for 2013. Who knows if the dude's gonna keep living up to the high standard he's been setting. But as I wrote in my post The Scent of Popery Hangs Weirdly in the Breeze, "I am pleased... to see this weird new Pope saying un-politic truths, siding with the poor, holding the hand of the downtrodden, and generally breaking with all sorts of ugly popish conventions. While I will always advocate strongly against the adoration or veneration of any person, I am quite pleased to sound out a Huzzah for this weird new Pope's words and actions, which are giving voice to some actual Christian truths through a very loud megaphone."

And to be able to say that openly, loudly, without fear of employment-reprisal... well, that's worth the loss of a steady paycheck, any day.

*Note: I put a lot of time into giving you this ad-free reading experience. If this post means something to you, you are more than welcome to pay me back by linking the bejeebers out of it on your social medias. And/or better yet, you could go pick up a copy of my book, "IMMORTALITY (and other short stories)." Dankegratzithanks.
Labels: church faith religion