After I posted my (thus far) one hundred percent accurate prophecy of what the next few years will hold for the people of this planet (with some variance for personal taste), someone asked me on The Facebooks what we're supposed to do about our impending doom.

Like any good modern-day prophet, I evaded the question.

But as I can't in good conscience leave the dozens of readers of this blog hanging (hi, mom!), I will now tell you how our current predicament is your fault, and what you would need to do if you wanted to correct it.

Granted, you're not some corrupt, faux-swamp-draining "politician."

But you're still part of this failing tire fire of an empire, and you've been using your wallet and lifestyle to vote for just exactly this current reality for your whole life. You've averted your eyes again and again from the ecological and economic injustice you've enabled, all in support of your lust for the cheap, plastic garbage they call consumer "goods." You've done this because it was easy and convenient, and because you wanted to. You've done it because you are selfish, lazy, half-hearted hedonists.

You've made "Have fun!" a national slogan and a standard blessing at any departure.

You've been intentionally blind to the impossibility of infinitely increasing consumption on a planet with finite resources.

You've participated, knowingly or not, in The Sixth Extinction, earth-history's first example of one species being responsible for the rapid kaputting of a ton of others. And while you could probably list a few of the victims (passenger pigeon pie, anyone?), you've doubtless never looked the villain right in the eye (in a mirror) and accepted responsibility for what you (yes, you) have done.

Don't get me wrong: you're perfectly nice people.

Many of you buy the organic foodstuffs and put the organic cotton sheets on your beds—at least in part out of a vague sense that chemically-fertilized agribusiness is poisoning the earth (although, let's be honest, you mostly do it because you're anxious about cancer).

Many of you recycle, a mostly-placebotic activity that, yes, you should still be doing, and that no, will not save the planet—not by a long shot.

Some of you even buy fair trade coffee.

These are all perfectly nice things to do, and better than the alternative. But mostly they're about you, because (as I've already mentioned), you are a self-absorbed, lazy, half-assed hedonist who prefers for the most part to avoid thinking about uncomfortable things.

Some of you have formed whole political coalitions around this denial and yeah, it's possible there's a special circle in hell for people just like you. Especially those of you who've brought your religion into it and claimed "Jesus made us do it" was justification for endlessly inventive cruelty.

But the rest of you godless liberals aren't off the hook, either.

You're often just as self-righteous, pointing your fingers at "those idiots" and twiddling your thumbs over your phones in glorious armchair-slacktivism, Cancelling anyone who looks at you wrong while at the same time doing pretty much the exact same things as the people you try to shame.

I've done it all and it's ultimately led me to the following conclusion...

I just realized your name might actually be Kevin. I'm not trying to single you out, Kevin. I'm just overly fond of movie references. 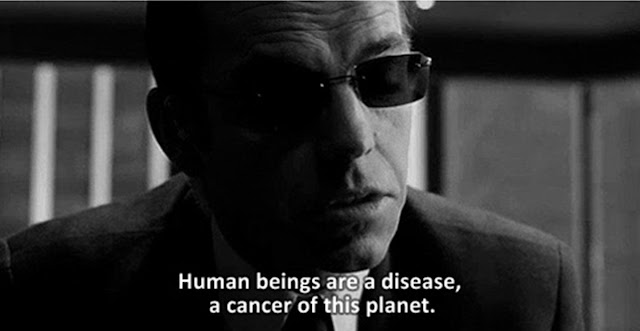 And not entirely accurate.

Humans beings are capable of being gardeners and nurturers of the natural world. We are creative wonders, capable of fashioning almost anything we can imagine into reality. The complexity of our beautiful creations is mind-boggling. We are capable of immense kindness, goodness, and love.

Get too many of us together, though (anything over 150 will usually do the trick), and it's carnage and mayhem everywhere.

Although it might feel like it sometimes, we are not a locomotive on an inescapable Track-of-Doom. We have choices. We can change. We can leave this path.

Just because this planet reached its carrying capacity for humans (at their then-average waste-levels) in the 1980s, that doesn't mean the planet couldn't play happy host to our present more than doubled population... if we're willing to make some tough choices.

This is where I tell you exactly what you don't want to hear: that if you're going to do your part heal the damage we've done to each other and to God's Good Earth, you're going to have to change things that you think of as not only normal, but practically your right.

You likely won't be willing to make these changes, and will resent me for suggesting that you should. I'm as desperate for acceptance as the next schmuck, so as much as I want you to stop destroying the planet for my progeny, if you think that reading on will make you like me any less... just go ahead and stop right now.

Okay, fine. But don't say I didn't warn you.

Here's what you (yes, you) are gonna have to do if you don't want your grandkids to be trampled someday by the Four Horsemen of the Apocalypse:

I have a strong suspicion that the masses will not make these necessary changes. Probably the tens of people who read this blog won't, either. Heck, I'm pretty sure that I won't change a dang thing about my life on account of my own prognostications.

I guess I'm just recording my protest so that one day, when members of an alien civilization examine the artifacts of our by-then-long-vanished civilization, they'll conclude that while we were (on the whole) an idiotic species, some of us were at least aware that we were idiots, and were not pleased with the situation.

I guess that's it.

So long... and thanks for all the fish.