In Case You're Wondering What Happens Next...

Unless you've been vacationing on North Sentinel Island for the past few months (you haven't), then you've probably heard that a lot of celebrities are losing their minds and posting stuff  on social media that they might later regret.

It's possible this has made you feel a bit more anxious than usual. I mean, if celebrities can't be counted on to remain cool-headed in a crisis, then who?!?

Well, my anxious American friends, you can set all that aside because I am here to tell you exactly what comes next. What's more, I'm going to give you both a best and worst case scenario to choose from—so you can just do what you always do and choose what you want to believe, facts be danged.

Our Dear Leader in the White House has informed us that this is no longer a hoax and that if we all do exactly what we're supposed to, we can expect a minimum of one hundred thousand COVID-19 deaths by the time the virus tapers off around mid-summer.

Since our government has been completely trustworthy so far (and since we know that people in this country generally do what they're supposed to), let's assume the best case scenario is what we get.


So: one hundred thousand people will die of COVID-19 in the United States.

That's significant, but given that around two and a half million people already die every year in this country, it's not gonna horribly overwhelm the capacity of our healthcare system. It'll be a tough go for a while, sure, but we'll get through it.

By late-summer, businesses will be back to businessing.

There'll be a recession and it will be bad, but the machines of industry will churn away and, despite a significant amount of collateral damage, most of the people who suffer the worst will be the poor, marginalized, and disenfranchised. If you're reading this post, you've got leisure time and a home internet connection, so that's not you. You'll probably be fine.

And who knows? With all the miracles flying around these days, somebody'll probably discover a simple cure like, I dunno, eating apple fritters. We'll have an apple fritter party and just like that... the virus will disappear.

So breathe a sigh of relief, remember to self-care, and call your elderly and immunocompromised friends and family to make sure they know how much you love them.

Also, don't stress too much about following social distancing guidelines. Other people are taking care of that on your behalf (like the herd-immunizers keeping your kids safe from polio), so you're probably cool to keep getting together with your discussion group to talk about how this is all just a plot to grow Big Government and strip away more of our God-given American Rights.

Sure, the rich will get richer and you might get a bit poorer because something-something-economics, but in no time at all you'll be back to planning Fijian vacations and buying plastic knick-knacks that can be tossed into the nearest landfill or stream when they break.

America will go back to business as usual and nothing will ever go seriously wrong because Global Warming is just another Chinese Hoax (like this virus), and global inequality is just something the Liberals like to shout about in their efforts to slow down God's Progress.

Look, Josh Optimist is an idiot.

The White House seriously botched their response to this thing (compare how we're doing to South Korea, which reported their first case to the WHO on the same day as we did). Also, Americans are obsessed with their right to do whatever they want, whenever they want. Not all of them are irresponsible, anti-social jerks... but enough.

Here's how it's gonna shake out:

By mid summer, at least a quarter of a million people will have died of this thing. Everybody will panic a bit and things will get locked down tight. This will be blamed on marginalized groups and minority groups and basically everybody other than whomever is doing the blaming.

There will be incidents.

The ever-reactive White House will crank up the martial law dial and because this is America, guns will start appearing everywhere. There will be more incidents. More martial law. More people ignoring quarantine because, guess what: 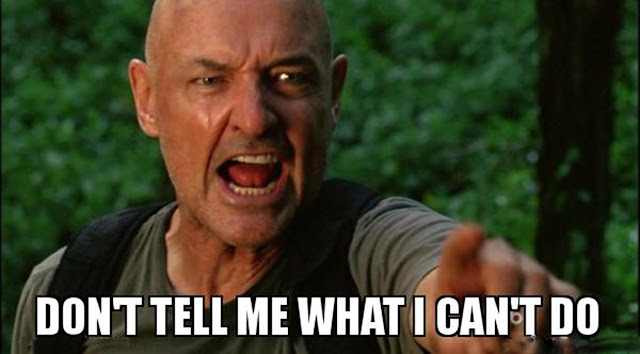 Eventually, though, the dust will settle.

Everybody will know somebody who died. A ton of people will go back to shame-scrub their old Facebook posts, but it will be too late and it won't matter because as angry as people will want to be at the Spring Breaker idiots who accelerated this whole thing, mostly they'll just be tired.

There will still be no vaccine.

People will head back to work because The Show Must Go On and also because, without money, they'll start to get desperate and wonder if maybe, just maybe, they were wrong to think you could build a society on the backs of real slaves, essentially-slaves, and the wholesale destruction of the planet... and that somehow that could go on forever without consequences.

More people will die of the virus.

The economy will tank: not just ours, but the Entire, Human-Centipede-Global-Economy.

Now, during the Great Depression (1929 - 1939), about sixty percent of Americans lived in rural areas and around forty percent were small farmers. So even though a ton of people were out of work, our food supply chain was diversified and robust.

Today, only about twenty percent of the population lives in rural areas, and only one percent of us are farmers (if you can call what most of them do farming, given how modern agribusiness has choked out small farmers to the point where a lot of what's grown on our "farms" can hardly be called food at all. Soybean casserole, anyone?).

We live in a very, very different country than Dust Bowl America. We've got almost thrice the population, an instable food supply chain absolutely dependent on a "functioning" globalized marketplace that allows us to dictate our terms to nations that don't have the resources (or the military) to fight back, and a populace so specialized and detached from the land that our desperate, last-minute attempts to plant a garden, raise chickens, and learn to hunt are doomed to fail.

City folk will head for rural areas, but there will not be enough food there to support the teeming (and well armed) hordes. These city folk will not be monsters. They will just be hungry people with kids to feed. People who will be afraid like they have never been afraid before.

Then something else will happen.

Maybe the White House will decide to push back the national election, or maybe China will decide that since no one can stop them they'll do something a bit crazy, but regardless of what it is exactly: there will be a Bigger Incident.

An authoritarian figure (or figures) will step in and offer stability in exchange for, I dunno, losing the right to vote, or to play Quidditch in public.

This shadowy figure could be our current "I Love Authoritarians" dictator-wannabe-in-Chief (if he somehow manages—as an obese, elderly man—to miraculously dodge the COVID-19 bullet), or it could be someone else. It might even be China, sailing in with an armada of weapons-bristling ships and a few aircraft carriers piled high with Pizza Pockets.

Most of the most desperate people will gladly agree to whatever deal is offered, right there on the spot. I mean, we never really liked voting all that much anyway, right? And don't the Chinese have superb internet service?

Some, however, will not approve of this situation.

The United States will fracture, and the globalized economy (with its fragile, dangerously interconnected symbioses) will crash.

Millions more will die of starvation and violence.

Once we've finished blowing ourselves to bits and starving to death and learning to farm again and also settling into a weird jigsaw of new feudally-run nation states... things will actually be quite nice.

I mean, if we manage to avoid going with the nuclear option, it's very likely that the air will clear up, the coral reefs will (eventually) come back, and those of us who survive to make grandbabies won't have to watch our descendents spend their last, choking days wallowing in a dank, trash-choked cesspool.

Perhaps we'll even have learned our lesson(s), and the new world we build will have all of the good (Netflix, yay!) and none of the bad.

Your best and worst case scenarios.

Feel free to pick whichever you like, and remember... this is America! You deserve the best because you are the best, and if you want it and are willing to work medium-hard for it, all of your wildest dreams will come true!

Thanks for letting me get that off my chest, and you all have yourselves a delightful little apocalypse.
Labels: consumerism culture guns politics