The Bridge of Love 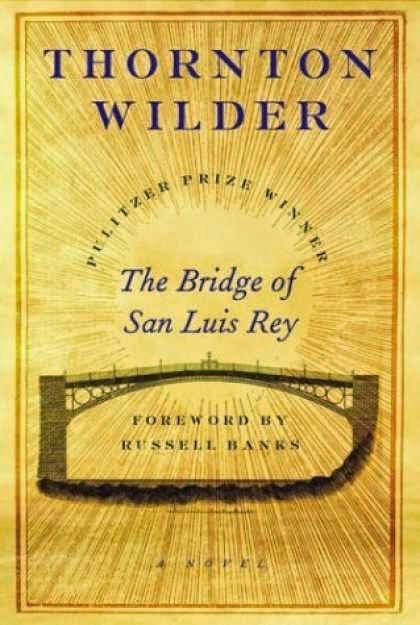 Thornton Wilder won his first Pulitzer prize in 1928 for the novel The Bridge of San Luis Rey, for which he also got paid that year the modern-day equivalent of about a million bucks. The novel is roughly 34,000 words (about a third the length of my most recent novel) and is set in Peru, the country where I lived until 1997.

At the time, Wilder himself had never been to Peru. This doesn't much matter, though... the novel is beautiful, and if  you haven't read it yet, you should.

The Bridge of San Luis Rey digs into the very meat of what it means to be a human. It asks what this all means, and then it asks the question again. Over and over, without ever actually answering it—just slipping and sidling its way toward a conclusion that'll sneak up and hole-punched you in the heart-muscle, with something that feels a little bit like the delicious pain of love.

When the book came out, it apparently pissed off a lot of Catholics for its portrayal of the Spanish Catholic church in the 1700s (seriously?! they're gonna defend the church in the time of the Inquisition?) but I didn't find it troubling at all, in a religious sense. I found it beautiful.

Actually, it is a troubling book for those addicted to religion—which is to say for those who are addicted to the idea that everything has to make sense.

But that type of quibble doesn't interest me so much, anymore. What interests me is the peculiar fact that whenever I encounter real love (as I did in this book), it hurts.


I think it's because when you really and truly love something or someone down deep in the cockles of your heart, the awareness of that love always carries with it an awareness of its own finiteness—its own transience. It is glorious, yes, but it is even now going. So as much wonder and beauty and expansion are packed into each pure sensation of true, self-dying-expanding love, it is always accompanied by an excruciating tear.

If that were all there was, it would perhaps not be enough (although it would have to be).

But the poet John Dunne has added that "I am a world made cunningly / of elements and an angelic sprite," and I think there is something to that. Some sense I have of transcendence that cannot be battered down—not by all the glum-faced materialists and staunch atheists in all the world.

At the end of The Bridge of San Luis Rey, an Abbess stands in the darkness of a sickroom where the hopeless have come to receive from her a little light and warmth in the midst of their pain and dying. She stands with her back against a post and she says, "Even memory is not necessary for love. There is a land of the living and a land of the dead and the bridge is love, the only survival, the only meaning."

This is not a theological treatise she has made, but a hope she has risen to in the context of seemingly endless suffering.

While Wilder himself claimed to be nearer to what some have called the book's "anatomy of despair" than what others see as its vindication of optimism and hope, he nonetheless acknowledged that "human affection contains a strange unanalyzable consolation," and quotes Chekhov as saying that "The business of literature is not to answer questions, but to state them fairly."

Here in this novel, at least, Wilder has stated it fairly.

And I, in the painful beauty of his lovingly-created masterpiece, am consoled.

This website is a labor of love. My reward is our literary intercourse: heart to hand to eye to heart. If you get something from the experience, please... share the love.
Labels: review