There's no telling what sort of mischief a novel can get you into.

When I was in I think my junior year of high school, I read the Thornton Wilder novel, Theophilus North. Here's the description from the Amazon page for the book: 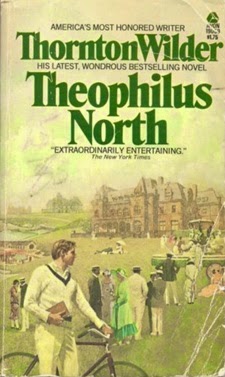 "The last of Wilder's works published during his lifetime, this novel is part autobiographical and part the imagined adventure of his twin brother who died at birth. Setting out to see the world in the summer of 1926, Theophilus North gets as far as Newport, Rhode Island, before his car breaks down. To support himself, Theophilus takes jobs in the elegant mansions along Ocean Drive, just as Wilder himself did in the same decade. Soon the young man finds himself playing the roles of tutor, spy, confidant, lover, friend, and enemy as he becomes entangled in the intrigues of both upstairs and downstairs in a glittering society dominated by leisure."

Although I can't remember too much about what happens in Theophilus North, there is one, very specific detail that got stuck firmly in my head: when the titular character is engaged as a tutor for this total rotter of a kid, he discovers/deduces that the reason the kid's got all these problems is that he hasn't had the chance to really ever be gross. I may be remembering the details wrong, but as I recall, the kid has these super-proper parents and he's been sickly and otherwise isolated in life, so he's never had the opportunity to be around other little boys and say the sorts of gross little things that boys like to say (as a release valve for the Nonsense of Propriety to which polite society tends to subject its victims members). Theophilus commences with being mildly gross with the boy—joking about farting, and whatnot—and before you know it, the kid has flowered into this wonderful young individual.

While this would be a great point at which to rabbit-trail into a discussion of the weirdness of what some folks like to call "civility," I'm actually bringing all this up to point out the sort of impact that good art can have on a person.

See, I have a seven-year-old son.
And there's no other way to say it—my son is super-gross.

I don't know why my son is even more gross than most other kids his age, but he is definitely in the top tier on this one. Perhaps it's genetic. I was certainly gross when I was a kid, and I can recall a certain creative facility in the ongoing Competition of Grossness I held with my friends... but no-word-of-a-lie, my son would've topped us all.

Now, I love my son, so I want him to be able to function in "polite society." I am therefore careful to discuss with him the concept of Appropriate vs. Inappropriate times-for-grossness. But I have always had in my head the memory of that Thornton Wilder story, and it has colored my parenting—has kept me much more chill than I might otherwise have been when my son does a cannonball into a particularly nasty Vat of Grossness.

Sometimes all the writing I do feels completely futile, like none of it matters at all.

But then I remember books like Theophilus North, and I think... you know, maybe that could someday be me. Maybe I could write the thing that sticks in someone's head and changes the way they love someone in their life.

Maybe one of my books could change the world.
Labels: art books parenting