story of a josh

Hi. Welcome to my backstory. 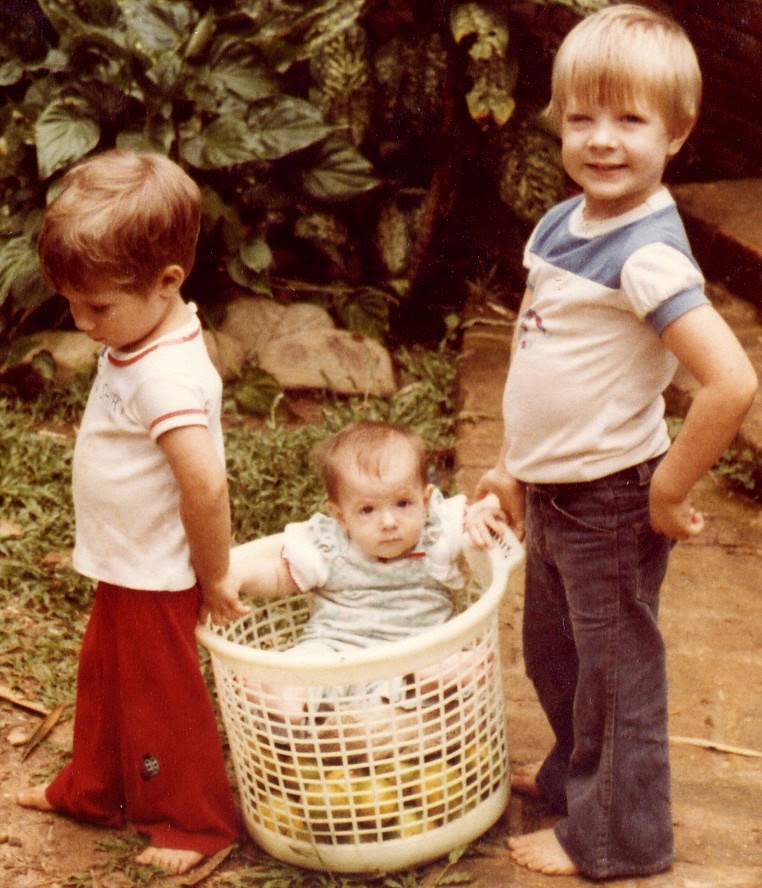 I was born in 1979 in Lancaster, South Carolina, which a delightful octogenarian once informed me has the second-highest syphilis infection rate in the country.* When I was six months old, my Canadian father and American mother took me and my older brother Jo-Ben to the Amazon basin of Peru, South America, where we would live (excepting the odd furlough in AmeriCanada) until I graduated high school.

My childhood, then, was spent migrating from fruit tree to fruit tree, paddling a dugout around Yarinacocha, and catching iguanas and boa constrictors and anything else that got too close to my bare, nature-stealing hands. My parents had a daughter (Hannah) who was born in Peru and placed in a wooden, screened box that we later kept in our house as a fruit hamper. True story. Then they procreated again in the form of my youngest brother, Jason. He's pretty much a ninja. As am I. As are all Barkeys, everywhere.

I  read a lot of books, growing up. And I made a lot of art. I also played a lot of soccer and obsessed about girls and wallowed in existential angst.

After graduating high school, I followed my older brother to a private, liberal arts school in British Columbia, Canada, where I majored in English and minored in art. To pay for it, my brother and I got summer jobs planting trees. It's possible that between us, we've planted nearly a million trees. By hand. Because we're ninjas.

When I graduated and my plan to do community development in Nicaragua fell through because somebody (not me) was fiscally irresponsible, I ended up living in my parent's garage in North Carolina and working as a teacher's assistant at an elementary school.

I went back tree-planting, this time as a crew foreman in a camp where my brother was also a foreman. He was a ninja at that, too - as was I. Except of course for that time my crew nearly ruined a contract and they just about fired me for gross, non-ninja-like incompetence - an anomaly no doubt explainable as a by-product of solar radiation. Or something.

The girl I'd met wanted to move to Canada for school, so back we went. I kept running crews and she went to school and everything was dandy. My crews did better and better and then I got promoted to camp supervisor. Which would've been a pretty cherry gig, except the United States violated their own trade agreement, the Canadian planting industry got less profitable, and the company I was working for went toes up.

I found a few more crew-leading gigs, paid my girl-cum-wife's way through school, and did a little procreation of my own.

A child was born. The shining light in a tawdry-by-comparison universe.

We moved back to North Carolina, where the wife decided to become the not-wife, and things were not as dandy for a while. I had a good job teaching high school English, though, and supportive friends and colleagues. Also, my not-wife was super-good about working with me in a healthy way for the good of our son. So then it actually was dandy.

Around then, my writing went into overdrive. I arranged a lot of words.

A bit of time I'd spent as a background extra for film and TV in Canada (JUNO, SMALLVILLE, PSYCH, etc) turned into an enthusiasm for writing film, and the first thing I ever wrote - a short film called FORK - was produced in 2010. I was hooked.

In 2012 I left (was booted from) my teaching job, on account of theological differences with the guy who signed my paychecks. I decided to take that as an opportunity to leave the rat race and write a whole mess of feature films, and some books. If you're interested, you can check out my Amazon Author Page for some of my books, or read some script-pages over on my script-page-website.

These days, I live a pretty idyllic life: I keep house with my fabulous wife, hang out with my family, play a little soccer, and write. Oh boy, do I write.

I intend to write and write and write until I croak, telling stories that entertain, delight, and challenge the entire world. I'm honing my craft in the belief that this will lead to widespread acclaim, which will assuage all my insecurities and give me the financial resources to buy everybody I know a pair of gold-plated pinking shears. Because that makes total sense.

Mostly, though, I'm trying to do it for the love. Writing and making is at its best a love-based endeavor, and I want nothing more than to up the love-quotient in the world before the lights go out. I firmly believe that storytelling is the best way for me to do this.

Speaking of stories... I'd love to hear from you. Feel free to say "hello" in the comments, or drop me a line at jlbarkey at hotmail dot com. Write something weird in the subject line, so I know it's you.

Thanks so much for reading!

post script: There are about a bajillion posts on this website, which you can navigate in a number of ways in the sidebar. I keep this baby ad-free because Screw Corporate America! But if you feel like supporting an artist you like, please do check out and purchase one of my books.

*I include this fact because I think "syphilis" is one of the most beautiful words in the English language. Yes, I know that's strange. I'm a weirdee. Deal with it.
Labels: identity