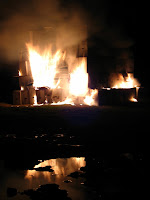 This might be because I am daily becoming one, or it might be because they're just so frickin' awesome. Like Ione, whom I met last night at the opening of an art show wherein were placed some of my paintings. She was sitting on a loveseat by herself. In front of her, on a coffee table made out of the floor of a bowling alley by Charles (the patron of the show) was a collection of beanie baby-like dolls with beads embroidered all over them.

"Are those yours?" I asked

"They sure are," she replied, "they're wearable art... but they're not for sale, Charles just badgered me into bringing them."

Ione is over eighty years old. She wore a peach pastel jacket and matching skirt, and more bling than most hip-hop artists: a panoply of silver and turquoise, beads and shells. She had a twinkle in her eye, a ready laugh, and a long string of fascinating stories.

I love old people on principle, but I especially love when they tell me something about myself. I mentioned early in our conversation that I was born in Lancaster, right near here. About an hour later Ione said, "You mentioned you were from Lancaster. Well, I try not to ever go there. I'm a member of the Moose Club, you know, and the closest chapter is in Lancaster. And I don't mind saying I like companionship as much as the next girl. The problem is, down in Lancaster these older folks, they think, 'well, we're past child-bearing years - no danger of getting pregnant', so they'll go to bed with just any old body. And that is part of why Lancaster has the second highest rate of syphilis infection in the whole country." Then she had her another hearty, head-back laugh.

I never would have known that the town of my birth is so notorious for, well, y'know.

Fact is, I love "syphilis". Not the disease, so to speak, but the word. It may not be something the Italians are proud of, but I just think it's gotta be one of the most beautiful words in the whole wide world. Maybe I need to learn more Italian, cause every time I say the word "syphilis" it brings me joy and makes me think of bubbling brooks.

I can see why Elizabeth Gilbert of "Eat, Pray, Love" fame fell so madly in love with the language that she'd move to Italy for four months just to learn it. Maybe my attraction to the word has something to do with me being from Lancaster. Who knows?

Old people, syphilis, and Elizabeth Gilbert. I love the way that art connects the fragments of my life.
Labels: age art books sex