I'm tired of hearing American Church-People decry folks in the modern entertainment industry as moral degenerates, and the entire entertainment biznatch as a moral wasteland. 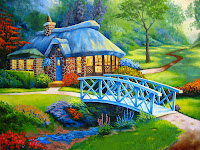 For their "art" they prefer saccharine, white-washed pablum that endlessly affirms the principles of their mutual-congratulation-society. In so doing—in demanding that the culture's artists be so endlessly, insufferably "nice" all the time—they rob themselves of any hope they might have of escaping from their adulterous, Pharisaical fornications with the power/business structures of this effed-up world.

As the prophet Isaiah once said, "They say to the seers, 'See no more visions!' and to the prophets, 'Give us no more visions of what is right! Tell us pleasant things, prophesy illusions. Leave this way, get off this path, and stop confronting us with the Holy One of Israel!'"

Meanwhile the clergy—which in this country earns (when you include benefits) an average of eighty to a hundred and ten thousand dollars a year—blandly pontificates from the pulpit about either how evil gays are... or how cool this particular church happens to be for liking gays even though what they do does still seem to be a bit distasteful... or how fantastically awesome this church is for seeing the light about gays being made that way by God.

Anything but cry out LOUDLY about the sorts of things JESUS liked to rant about, such as the ill-use of the poor at the hands of the powers and principalities of this dark world. Why?

Well, would YOU argue against the power-structures if you, alone, were earning roughly DOUBLE what the average HOUSEHOLD earns in this country??? And that's just the average. A lot of the mega-pastors—the ones with the tens of thousands of congregants, and outsized influence—are bringing in anything from a quarter of a million to a million dollars a year in salary, benefits, and book sales (which yes, Steven Furtick, are a benefit of your job).

Why would they side with the poor? They're as far from the poor as Jesus was from Ceasar.

These aren't the apostles of Jesus, people. These are mouthpieces of corporate America, giving a perpetual God-stamp of approval to the boot-heel that stomps, again and again, on our country's most vulnerable souls.

Meanwhile in the entertainment industry, artists are fulfilling the role of prophets and speaking out against this most-likely God-damned injustice. I've mentioned John Oliver before, but today I'm thinking more of British comedian and activist (a.k.a. prophet) Russell Brand, who continues to step into the void left by a religion more taken with self-pleasuring gimmicks than service to an itinerant advocate for the poor, meek, and broken down.

Stop spending all your time arguing about the precise meaning of each verse in Paul's epistles, you ding-dongs, and start reading the clear-as-day words of Jesus himself in the Sermon on the Mount!

Meanwhile in Britain, here's Russell Brand on the recent arrest of a 90 year old Florida man who—out of love for and in service to Jesus—has been arrested and faces jail time and a hefty fine for (WTF!) feeding the poor!

And yet "Christian" America still goes out every Sunday to church, lumbering down carpeted aisles to sit in well-padded seats as their so-called pastors pat them on the head and feed them cotton-candy promises of a continued status quo. A status quo that has them buying more and more (let's face it) shit, while millions of the people the world over are starving to death.

Would these church-people listen to Russell Brand, repent of their wicked self-indulgence, and have a shot at threading that elusive needle's-eye into the Kingdom of Heaven?* No! Of course not! He says potty words and he's got tattoos and he's been in raunchy comedies. He doesn't believe everything we do and is therefore not one of the elect. He's a Hollywood regular who's therefore most likely one of the devil's own imps, in disguise.

Never mind that he—not your pastor—is preaching words more in tune with Gospel of Jesus.

I'll side with Jesus.

*Hint: The Kingdom of Heaven is here! Now! And you're not in it, you gratuitous little sodomites**!

**Sodom was destroyed for not taking care of the poor. Think about it.

Whazzat? You really enjoyed this post? Well, perhaps if you share it on your social internets, then someone you know will enjoy it, too.
Or maybe support my writing habit with one of the options at the top of the sidebar to the right. Like, by grabbing a copy of my short story collection. Or picking an option and paying for a custom blog post. -->
Labels: community consumerism culture