IMMORTAL ORIGINS: "A Man You Can Count On"

I hope you've had a chance to check out IMMORTALITY (and other short stories), a collection I self-published a year and a half ago that's sitting at a solid 5-star rating on Amazon, where it is currently on sale for a measly eight dollars and ninety-six cents (or $3.99 for Kindle). If not, you should watch the following video, go to Amazon, taste the free sample, decide you love it, buy a copy, read the story in question, and then come back here for the rest of the post.

I'll be writing about the story behind the story, and I don't want you feeling like a clueless, gibbering ape.

So, the first thing you have to know is that I wrote many of the short stories in this collection on a dare made by Ray Bradbury during a talk he gave at Point Loma University, in which he challenged would-be novelists to learn their chops by writing a short story a week for a year.

This was not easy.

Every week after I'd finish a story and post it to this blog,* I'd immediately get the sensation that that was it. That was my last idea and there are never going to be any more ideas ever again and I'm going to fail horribly and everyone's going to laugh at me.

Yet every week, something else came.

I'd been teaching high school art, and the week I wrote "A Man You Can Count On" had not been a good one. One particularly horrible, no-good, mixed-up, very bad day there was a pizza party for the Art Department Booster Club. The party didn't start until later in the evening, at the home of one of the parents, in the opposite direction from my house (which was already thirty-five minutes away), which meant I'd have to wait around in my classroom after school until the time of the party.

To top it off, I could feel myself coming down with a cold.

But this was the first Booster Club gathering and my presence was expected. So I sucked it up, waited around for a few hours, and then drove out. The party wasn't for another hour, but I was thinking that if I showed up early I could also leave early, and I wanted to swing by a grocery store and pick up a jug of orange juice on the way.

I bought my orange juice / cold medicine and walked back to my car. It was locked. The keys were in the ignition. I was only wearing shoes, pants, and an Art-department t-shirt. The sun was setting, and it was getting very cold.

Not having a cell phone, I went back into the grocery store and called home. My younger brother Jason (generously) agreed to drive up and bring me a spare key, so I lay on the still-warm hood of the car and sipped orange juice, shivering as I waited. When it got too cold, I walked to a nearby Starbucks and bought Jason a gift card for his time. He showed up, I thanked him, and then I got back into my car.

I managed to follow my hand-drawn map right to the house where the party was happening with no further issues. I knew it was the house, because I recognized my boss's car, outside.

I went back to the front of the house and rang the doorbell a few more times. You guessed it... no answer. I tried the doorknob. Locked.

That was it. I walked down the sidewalk and back to my dying, decrepit, beater of a grandmother car, hoping against all hope that no one would answer the door and stop me, forcing me to go back inside when all I wanted was off that property, out of that neighborhood, and back to my own, warm bed.

As I drove home, I stewed.

Why hadn't they answered the door? Well, because they were having fun, I thought. They were at a party and they were having fun, and they assumed that anyone who was supposed to be there at that time of night would have their phone number, and would call to be let in. Except I didn't have a cell phone. I didn't have a cell phone, and I didn't fit in their world of big houses and big money. So I was no one - just an annoying stranger to be left out in the cold.

Maybe that's not what happened. Maybe they were just blasting music so loudly they couldn't hear me. Maybe they had locked their front door not because suburbanite people are paranoid freaks, but because there'd been a spate of daring robberies in that neighborhood the week before.

I didn't care. I was convinced that my exclusion was the direct result of economic injustice, hegemonous corporations, suburban stupidity, and America as a-- 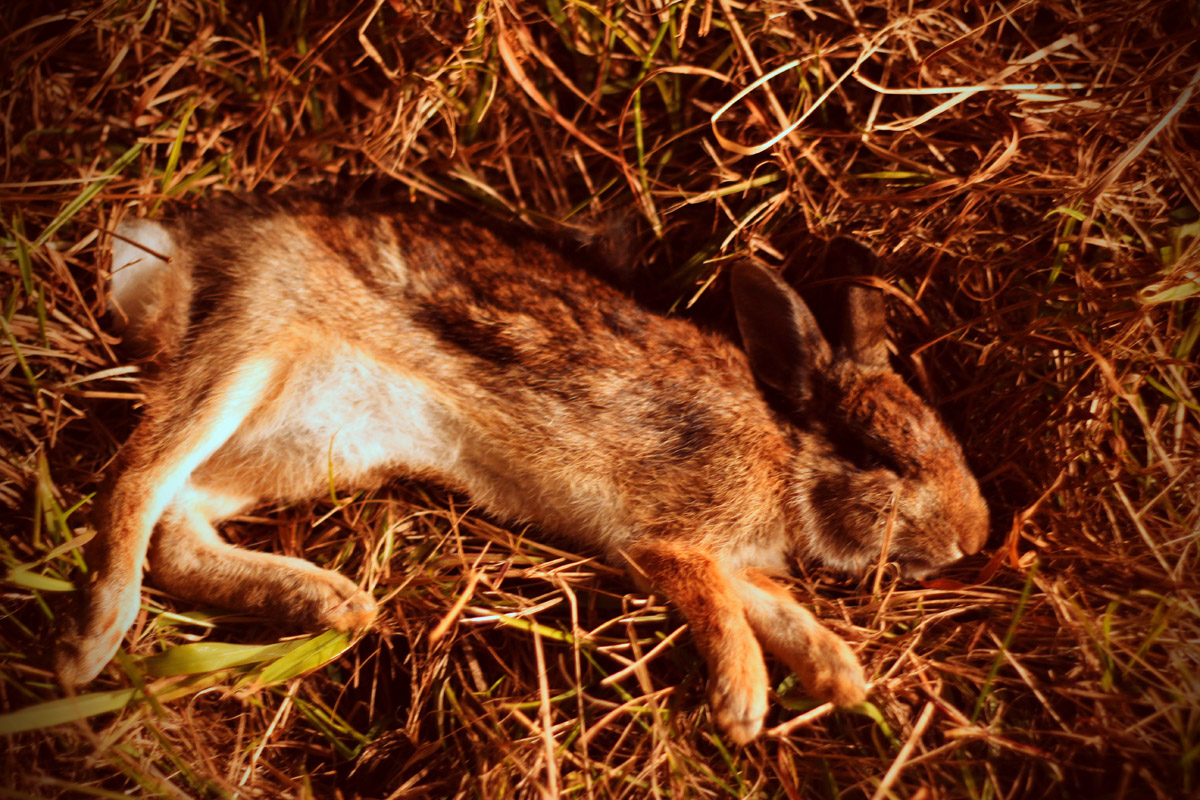 I saw the rabbit just before it went under my tire. I may have cursed. I don't remember. I pulled to the side of the deserted country road and walked back with my flashlight. The rabbit was there, and it was dead. I went back for my camera to take its picture - to memorialize it, somehow, so that it would not have died a completely unheralded death. My nose and eyes were running, a little, and it wasn't entirely from my oncoming sickness. I went home and wrote a blog post, venting my frustrations into the internet void.

Then I wrote a story.

I wrote a story called "A Man You Can Count On," and I put into it all my tears and my frustration. I put into it how I felt about the veneer of politeness shellacked over every last bit of southern American culture, and how when it comes down to it, we're all a bunch of rabbit-killing monsters. I put into it my frustration over years of working in a private school where most of the parents seemed more concerned that their children appear well-behaved than that they actually were healthy and well.

Where they were willing to DRUG their own children rather than let them struggle and fail under the pressures of a difficult college preparatory school.

I wrote these things into a story about a young rail-rider trying to return to the suburban North Carolina home he never knew.

I rewrote that story about thirty-three times.

Then I threw that story into a collection of short stories and made it available to you, oh internet phantasm, for the measly price of not-much-at-all.

So that is the story of "A Man You Can Count On." And if, for some inexplicable reason, you've read this post without first having read the book, well... that's insane. Go click THIS LINK, buy a copy, and support my writing habit before I have to go back to eating bugs to stay alive.

*I posted the stories on this blog to force myself into accountability, but they were in extremely rough shape and have subsequently been removed... so don't bother looking for them.
Labels: immortality