i ain't no k'naan

The first time I heard K'naan's music was in the truck on the way to a day of treeplanting. I had this policy where we had to give everybody's music a fair shake, so even though as foreman I had control over the stereo and even though my little missionary kid ears were tingling from his truly astounding potty language, I let it play.

Eventually - not then, but eventually - I learned to appreciate K'naan's music, and to accept that perhaps a Somali Canadian who'd lived through the ugliness of a war-torn childhood had a bit of a right to make my ears tingle as he struggled to draw attention to issues of social justice; and to express his frustration at how effed-up the world sometimes is.

I think the bit that bugged me most, in my pre-enlightened state (snerk), was the song "Stabbed by Satan."
I don't think I ever stopped to actually listen to the words, but at the time it "sounded wrong," and that was reason enough for me to tune it out on the truck ride to another day of planting hell. Except, it wasn't hell.

Planting was never hell. Not the sort of hell a lot of people live in, daily, worldwide. Like, say, a whole lot of Somalians, who are currently watching their children die at astonishing rates due to a truly horrendous drought. Here is the chorus to that song:

If anybody has a right to express such a sentiment (and with as many potty words as he wants), it's a child of Somali war. I ain't no K'naan.

And even though I ain't no K'naan, I still sometimes have days like today where after a long, hard journey into night I end up topping it all off by accidentally weaponizing my car into and over a defenseless rabbit on that asphalt river I mentioned earlier.

So I turn around and go back, and I stand there over yet another dead creature for which I am unable to cry (that comes later, when I get home) and I lay him out on the grass and say a prayer and tell him I love him and take a picture - so that at least his death is remembered. I feel again the crushing, horrendous weight of it all and you know what? Sometimes blog posts don't have happy endings. Because you know what... ? 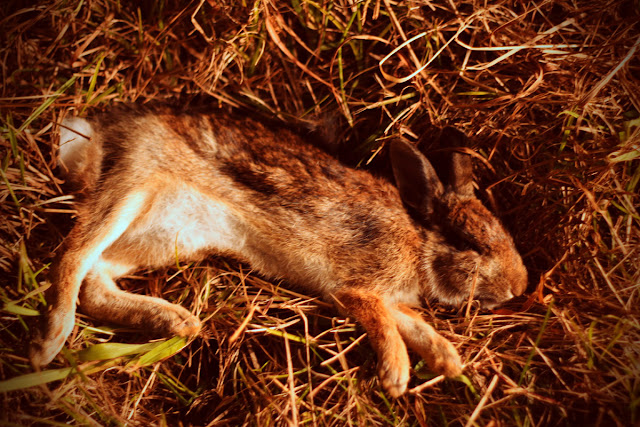