You have two choices today: create, or destroy.

And yet, you also don't. Because that choice has been made for you by The Way Things Are. You were born, you will create and destroy, and then you will die. And it seems to me that all you can really hope for is to sway it, a little, in one direction or another.

Lemme try to explain within the framework of the belief in which I was raised -- Christianity:

In the beginning, God created the heavens and the earth, and all the little creepy-crawlies that squirmed around upon it (including the most important creepy-crawly of all -- YOU). God did all this, and called it good. And God was right, because creation is good. There is True Love in creation, and true love is the greatest thing in the world (except for maybe a nice MLT).

After that, something mystical and kinda sucky happened. People figured out the difference between Good and Evil, and often chose the latter. After that, stuff got sort of muddled, and I don't really understand a lick of it.

But I'm not here today to point fingers, I'm here to talk about movies. 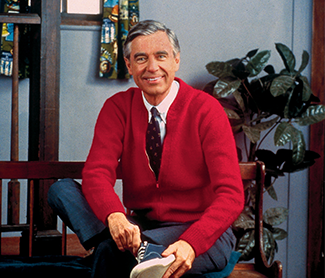 Now, unlike many of you, mine was not a childhood filled with Mr. Rogers, since I was raised in the Amazon and had to spend my days inventing my own entertainments. However, I did get to know him a little when on tour furlough in North America, and I do remember him fondly. Later in life, I read about the man and came to love him a wee bit more, and to be grateful that a guy like that ever walked the earth. I know I wasn't gonna point fingers, but Mr. Rogers was pretty much The Man, and I wish I coulda had the opportunity to meet him.

So I was nervous when I heard that two of this year's Black List scripts were Mr. Rogers biopics.

Whenever something (or someone) predominantly creative and beautiful is found on this earth, there is usually someone else who'll try to destroy it.

I opened the first script, and was pleased to see that it was well written. Solid characterizations, beautiful prose -- I could tell I was in for a story that conveyed in some way the whimsical, inventive nature of the man.

As it went on, though, it began to veer. Subtly, at first. Not into the Urban-Legend-Mr-Rogers-is-a-Pedophile-Nonsense of yesteryear, but more into the holy-idiot sort of sentiment so beautifully played by Peter Sellers in the movie BEING THERE (or Prince Myshkin in Dostoevsky's "The Idiot," if we're gonna be all snooty about it).

This didn't bother me, at first. The long and rich history of "holy fool" stories includes Jesus Christ himself (of whom I'm rather fond), so I was pleased to see Mr. Rogers making the list.

Now, before I get too steamed up, let me just say that I don't believe in veneration. I hold a more Muppety view of humanity. Which is to say that "peoples is peoples." Mr. Rogers was just another dude, so he no doubt had his obnoxious, destructive side. In the balance, though, he threw his life into a whole lot of creative activity, and lived in service of True Love. So I want to see that honored.

What I don't want is for someone to craft a work of art that -- ostensibly in an effort to "humanize" a beloved childhood icon -- ends up dragging him down through the muck. I don't want to see Mr. Rogers behaving like a fool without a really healthy dose of holiness mixed in. I don't want to see him getting wasted and suicidal, and being perpetually oblivious to the complete inappropriateness of many of his actions.

Maybe that kinda stuff  really did happen in his life,  and maybe it didn't. Like I said, "peoples is peoples," and I'm not here to point fingers.

But at the same time, if you're gonna go to all the trouble to make a movie that's going to become part of the man's Legacy -- a part that will perhaps define it for much of a new generation -- then wouldn't you want to focus a bit harder on the GOOD, when there was so much of that good to choose from?

I finished the script.

It turned out okay, I guess, but I couldn't help feeling that something had been besmirched. All human action is, I think, a mix of creation and destruction, so it's not as though the script was without beauty, merit, or truth -- and even Love. But besmirchment had occurred, and I felt dirty.

A bit later, when I found the second Black List Mr. Rogers biopic, I almost skipped it. Almost.

I opened the file.

I started to read.

It, too, was beautifully and creatively written.

It, too, riffed on the imaginative spirit that infused all of Mr. Rogers' work.

It, too, was not afraid to get gritty.

But this script was different.

There haven't been too many scripts that have made me cry, but this was one of them.

It was beautiful -- gorgeous.

I had to know.

So I looked these two scripts up on imdb. I saw that both of them are "in development." One of them has a director attached, though -- a good director. Which means it's winning. Which means it might win. It was the latter of the two scripts, and that made me happy.

In the end, what will it matter? Another movie: made, watched... forgotten.

But it does matter. Everything matters. Everything is a choice. For beauty and love and creation, or against it. This time, the choice comes down to Art. And next year (or the next), if both films get made and I have to decide where to put my money, I know what my choice will be.

How about you?
Labels: film