To the Guys Who Jacked My Car Last Night...

Is it sexist to assume you're guys? It seems to me that if women wanted to steal cars, they'd be awesome at it. But since most crime is perpetrated by men, and since men are more likely to be impressed by a sweet, sexy ride like my baby-blue, 1996 Oldsmobile Cutlass Sierra, well... let's call it a sexism of convenience.

Anyway, Officer Drew of the CMPD seemed to be of the opinion that you probably didn't steal the car for the money, so I can only assume that you just needed something that would impress the ladies as you cruised the strip on Halloween, in which case you'll probably be ditching the car after you've had your way with it.

You may find it hard to believe with a cherry ride like The Cutlass, but I never actually put theft insurance on it. I guess maybe I was thinking that since it was so irreplaceable, why bother? Regardless, it occurred to me that if you're going to ditch it anyway when you run it out of gas, perhaps you might consider swinging by my place and dropping it off (you'll find the address on the insurance card in the glove box -- where, consequently, you'll also find the trunk-release button).

I'm a writer, and I'd love to spend some time picking your brain about the criminal mind. I'm also a decent cook, so how about I sweeten the deal by offering a full-course meal whilst we tackle the subject? Feel free to place your menu-order in the comments.

If, however, you decide to keep my car (and you'd be kind of crazy not to), there are a few peccadilloes you should probably know about in order to maximize your experience.
That's all I've got right now. If I come up with anything else, I'll let you know in the comments. See you soon (fingers crossed)!

post script: My friend J.R., whose play, Venus in Fur, I had driven up to Charlotte to see (it was great, you should check it out) kept going on and on about how admirable it was how I was taking it, but you and I both know that a ride like that can never really "belong" to anybody. Besides, a karmatic swing like this for me can only be a sign of great things to come. Perhaps I'll sell a film script next week. Or maybe the woman I'm currently interested in will decide I'm worth being interested in, as well. Whatever the case, curate The Cutlass well, my friend. Curate her well.

post, post script: Since this is an open letter and most people don't have the privilege of The Cutlass's company, I'm including the last picture I took with her, which I think expresses some of my feelings over her loss. She's in your care now, so I hope you won't take offense. Peace and Love. 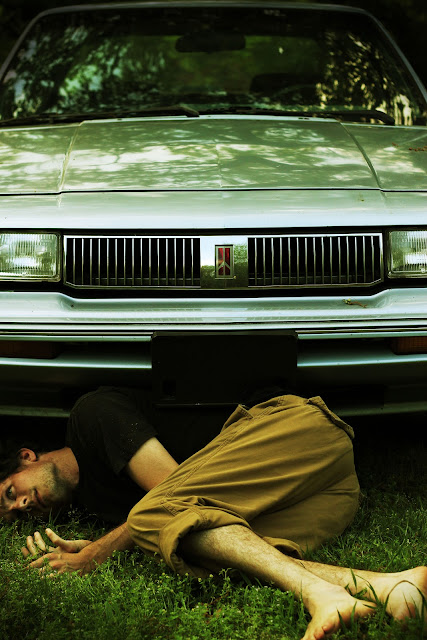 NOTE: The Charlotte Police Department recovered the car two days later. I have written a second part to this letter, which can be found HERE.

*Note: I put a lot of time into giving you this ad-free reading experience. If this post means something to you, you are more than welcome to pay me back by linking the bejeebers out of it on your social medias. And/or better yet, you could go check out one of my books. Dankegratzithanks.