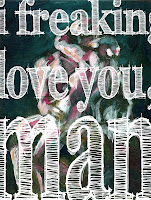 Words can be juiced, like apples or even prunes -- squeezed and crushed until their life-nectar is all gone. In some ways, "love" has been juiced. Overuse and mis-association have been so rampant that love can now mean almost anything... or nothing. Ask somebody whether they love their spouse, and the broad spectrum of definitions available for the word "love" is such that most can (and do) answer in the affirmative, no matter how toxic or dysfunctional that relationship has become.

Have you ever had someone say or do something horrendous to you, and then tell you they love you? I have, and though such an experience comes with a whelming sense of injustice, there's really not much of an argument to be made against it. You love me, but can't be bothered to extricate that dagger of yours from between my shoulder blades...? Well, uh, okay-then. I guess I can understand that.

"Like," on the other hand, is a word that still has some juice. Tell a staid, staunchly-Reformed, evangelical Christian that God loves them, and they won't bat an eye. But suggest that God "likes" them... Hoooo, boy -- bring on the awkward. And next time you're wondering how your obviously-struggling buddy's marriage is really going, ask him whether he still likes his wife. If he's the honest sort, the answer will be far from glib. 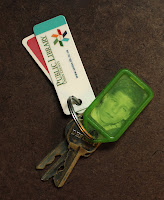 A little over a year ago, I wrote about how I often have trouble believing that I merit unconditional love, and how a friend suggested I think about when, exactly, I'd developed this low opinion of myself (answer: Junior High). Then he suggested I find a picture of myself from that time period, carry it around, and every once in a while  take it out and say kind things to it... telling my younger self how fantastic he is, and how highly I think of him.

But I did it. I found a super-gooberish picture of my Jr. High self, stuck it in a key chain, and started being kind to him. "Hi, Josh," I'd say, "You look great today. You've got a lot of talent, and I'm expecting amazing things from you."

It's been a year. And though I'm as aware as ever that Jr. High Josh was in many ways a socially-awkward, rake-skinny, late-blooming goob... I don't really hold it against him, any more. Instead, I see him as a young man of incredible potential -- full of inherent beauty and wonder -- who just needs a little encouragement.

And you know what's great? I don't just love my younger self, now... I really, really like him.