The Universe Does Not Owe You Pudding

You don't have a right to pudding, and it's not because you haven't eaten your meat. You just don't. The universe does not owe you pudding. Nor does it owe you happiness, a rich sex life, or a fulfilling career in fiber optics. The universe doesn't owe you anything, in fact. It's the universe, after all, and you're just you. Any rights you might have are a social construct.

That's not to say it's not a good thing to construct a society in such a way that potential pudding-consumption is optimized. Flan should probably be illegal, but pudding...? yeah, I can go with that. It's just the whole "rights" thing I have an issue with, because I think that when you start from a place of entitlement, it becomes much easier to disregard any exterior or long-term consequences of your individual desires.

A better (and harder) starting point might be something like kindness, or gratitude. Ask: What are the things I'm grateful for in my life, and what would be the way to encourage the expansion of those things into the lives of others? Ask: What would happen if those good things were to be available to everybody? Would I still be grateful for them? If you can set aside your feelings of entitlement long enough to ask these questions, you'll be better situated to make wiser, better choices.

That's a bit odd, though -- jumping from pudding to Kantian Universalisability -- so let's bring it back down into the practical realm of yogurt. 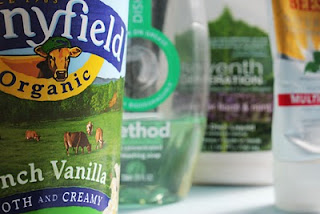 I got precious little yogurt as a child (on account of being raised in the Amazon Basin), so yogurt holds a very special place in my heart and duodenum. There are few pleasures in life so exquisite as a cold bowl of Stonyfield Organic French Vanilla Yogurt mixed with chopped-up, frozen strawberries, bananas, blueberries, and blanketed all over with a thin layer of granola. O.M.Genghis Kahn! I love that stuff.Yogurt is all-good, baby, and I'm so grateful to live in a world where it's just a grocery-run away.

There's the small matter of the plastic tub which that yogurt comes in. Plastic fashioned out of petrochemicals. Plastic that can only be fifteen percent recycled, at best, and is more likely to end up in a landfill or the ocean, at worst. Plastic made from oil that most likely comes from the Middle East and directly contributes to not only rampant pollution, but also war, war, and more war.

In a massively indirect way, the plastic tub my yogurt comes in makes me complicit in the drone-fired-rocket-death of some little kid somewhere and yes, I know, I'm being ridiculous, and how the h-e-double-hockeystick is someone supposed to live if they gotta micro-manage their every action so as not to be complicit in the gruesome, burning deaths of any innocent children?!?

The computer I'm writing this on is plastic, after all, and if you wanna talk petrochemicals, how about the bleedin' asphalt I gotta drive on to get to anywhere and do anything?

Then there's the matter of all the wonderful things that have been done with these nasty, chemically-derived plastics -- like, say, medical wonderments, and cetera. The web of complicity weaves its way in and out of all human action and intention: the good, bad, and the ugly. I mean, it's not like humans weren't savagely, brutally killing innocent children before plastics and War-for-Oil, is it?

Only a nihilist looks at the sometimes horrors of this life and concludes that the difficulty of doing anything rightly implies that no one should in any way make the attempt. I am not a nihilist, and I believe that awareness is a gift that demands responsibility in action.

Having committed myself to both living in this world and not really being of it, I conclude that inasmuch as I am able, the wisest thing for me to do would be to de-plasticate my life. Ergo, no more store-bought yogurt.

Which is crazy, of course.

What kind of idiot avoids something he enjoys and could easily have, just for the sake of a principle? What kind of idiot, when he gets to the store and realizes he's forgotten his grocery bags, has the checkout dude just pile everything back into the cart, sans bags?

I'm still as complicit and tainted as anyone. But if awareness is the beginning of wisdom, then at least I'm getting a glimmer. At least there's hope I won't be quite this idiotic forever. Baby steps, y'know?

Am I being a downer, here?

I try not to be. I try to be a harbinger of hope.

To that end, let me suggest one tiny little step you might consider taking towards de-plasticated wisdom:

You've got a cell phone, right? Well, are you aware of how that cell phone is made? Have you thought about what happens when it's time to dispose of the toxic materials in it? Have you thought about the human cost associated with its production -- the stinted lives of the people forced to work in unsafe and unsuitable conditions so you can have that sleek little piece of Jobsian design? Well, how about you do think about it, and after you deposit your old phone at an appropriate recycling facility, or donate it, why don't you consider replacing it with a Fair Phone? I just found out about Fair Phone via the interweaves, and it seems to me like the sort of thing worth doing. Like the sort of thing that's possible.