the Pursuit of Happiness 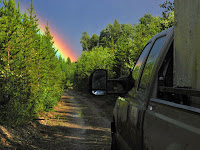 Americans like to frame things, boxing them up so that everything's tidy, and fits. Never mind that nothing's tidy and nothing ever really fits. Square peg, round hole... who cares? Smack it on in there.

Americans also like to frame things in terms of "rights." Our country started that way, and the whole "inalienable rights" thing grew and grew until it became an inextricable part of the national consciousness. And even though the original "framers" certainly only meant these rights to be inalienable to people who bore a close resemblance to themselves (Light skin, check. Pennoose, check), the principle has been expanded and used to good effect to diminish the ability of those with power to abuse those without.

This is a very good thing.

Nonetheless, the mantra of rights, rights, rights carries its own unpleasant baggage, because even with a concept as admittedly noble as this, not everything will fit. So a desire to protect the weak often transmogrifies into an unhealthy obsession with the whimsical desires of the individual at the expense, sometimes, of the needs of the community. Furthermore, the sense of entitlement implied by the word "rights" can lead to a lot of the ugly, selfish excesses in our culture.

My personal non-favorite, though, is the "Right to the Pursuit of Happiness." Not just because it's such an amorphous, wishy-washy concept that can easily be used to cover a multitude of ills, but also because it's a fool's errand.

We're venturing into Yeah-Duh-Land here, of course. You've probably heard a dozen different people talk about how happiness is a stupid, quixotic goal, and how it's actually only attainable as a byproduct of something else -- that chasing happiness in your life and relationships is like running after aromas outside a restaurant and expecting to get full.

But while lots of people say it (and better than I), nobody really listens. The Pursuit of Happiness is far too ingrained in the cultural mindset, and when most of the naysayers offer an alternative to the pursuit of happiness, they usually end up going on and on about behaviors that are, let's face it: slow, pedestrian, and boring. 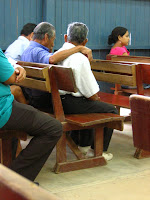 Nonetheless, I'd like to add my vote and a little focus to the alternate view, and say that if you really want happiness, stop chasing it. Instead, choose to make the tough, slow, sometimes painful decision to live with the people and places and things in your life. Seek to live with others in loving community. In harmony and peace with the world. In meaningful work. In just, moral, disciplined action. In directional living.

Do this, and you might find the happiness you desire (whatever that is).

But I'd bet my last shot of dopamine that the direct route is just not working for ya. So why not submit to the difficult mystery? Why not stop drilling holes, lay down that square peg, and start making the difficult choice to live outside the frame?
Labels: community consumerism identity