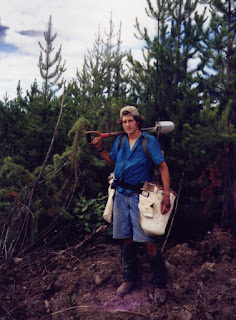 In the summer of 1998, I played a dirty trick on a friend that didn't get paid back for almost fifteen years.

It was my first summer in the world of production reforestation, and before the season I decided it would be funny to write a love letter to one of my fellow crew members, a guy named Jeff.

Now, Jeff was an amicable chap. Gangly, a bit, and equipped with the stereotypical mind of a math-major: brilliant, in its own way, but a little out of touch with the mundane happenings of our daily planting lives. It was a rare day, for example, that Jeff didn't forget something on our drives from camp to the cut-block, and it seemed like he was born to fall off of stuff -- cliffs, log-piles... whatever.

He could also be a bit gullible, so I suppose my decision to write him a love letter as the fictional "Joanne Barclay, from Freshman English" was a bit cruel.

Jeff and I were undergraduates at the same school, so I had the raw material for a letter as a desperately-smitten young co-ed who could write convincingly of her yearning for Jeff, and of the raptures to which she was driven at the thought of his strong young muscles, dripping and glowing with sweat out there in the wild, northern woods.

As fate would have it, Jeff and I ended up becoming roommates on our second contract of the season, in a logging camp where we were working for a company called Northwood; and I enjoyed listening as Jeff struggled with how to reply to the thoroughly smitten young Joanne who, he admitted, he didn't really even remember.

At last, though, I couldn't take it. I told him that while there might be some beautiful young nymph out there yearning for his manly embrace, it was also possible that one of his school friends was just messing with him.

Jeff bit his lip and thought it over.

That might be true, he admitted... but he also wasn't too keen on the idea of breaking some poor young woman's heart.

The contract at Northwood drew to a close, and we ended up with a ten-day gap between that and our next job. So I headed home for the break and arrived to find -- you guessed it -- a letter from Jeff.

"Dear Joanne," it began, "My heart melted like butter when I read the sweet words of your beautiful letter... Or, it would have, if you weren't such a sick, crazy--" and then Jeff went on to tell poor Joanne, in no uncertain terms, just exactly what he thought of her pathetic, desperate, syrupy missive.

Apparently, Jeff had decided that my alternate explanation was the more likely.

At the end of the summer, Jeff came to crash at my house for a few days; and when he did, I asked if he happened to recognize the address on the mailbox. It took a minute for his mad-scientist brain to put it together, but when he did, he had a good guffaw and then forgave me. No harm no foul, he said, and we put it behind us.

I had forgotten about Joanne Barclay until just this past month, when I met a woman on the internets whom we shall call "Laurel Poppanoppolis."

Laurel seemed interesting and (as I mentioned in a previous post) her pictures made me say "hubba-hubba." So I enjoyed our little epistolary repartee, even whilst acknowledging to myself that until I met her, it wasn't actually real.

And I had my suspicions.

I'm pretty good with the 'ol internet-search (Seriously -- don't tell me your full name unless you want me to email you your social security number and a picture of your house); but on the internets, Laurel Poppanoppolis didn't exist. Not impossible, I suppose, and her aversion to the internets is one of the things about her that I, as a qualified Luddite, found compelling. But still... unlikely.

She had a cool life story, though, and I wanted her to be real. So after five days of writing back and forth, I suggested for the severaleth and strongest time that we should maybe meet online, via gchat.

She agreed, and what followed was a hilarious Carney-game of "tag, you're it" and "oops, I just got bounced off again," as we went from gchat, to skype, to my suggestion that she email me her number so I could call her. And that, as they say, was the end of Laurel Poppanoppolis. Gone. Fini.

Now, I do believe there is a qualitative difference between playing a prank on a friend, and jerking around a total stranger for your own amusement. But the more I think about it, the less I'm sure what that difference might be.

So let us say, instead, that it's my turn for a good-natured guffaw. I have been catfished, as they say (or Manti Te'oed, or whatever).

The circle is complete.

*Note: Since writing this post, I've received an email from Madame Poppanoppolis insisting that she does exist, is a woman, and happens to be vacationing in a place with poor internet connectivity. It is possible that I have dodged the karmatic bullet on this one.

*Further Update, March 20th: I have now spoken to her on the phone. She is still claiming to be a woman, and unless she's got some really good voice-modulation equipment... she's telling the truth.
Labels: relationships