the last generation: a cyborg speaks out 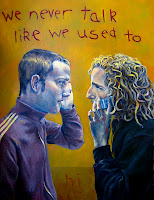 We're all turning into cyborgs.

In the movies this happens all at once, after an antiseptic, faceless villain injects us in the eyeball with a complacency drug. But in reality, it's happening over the space of generations.

The principle of "Divide and Rule" (or Divide and Conquer) was first formulated by the Greeks of antiquity, and suggests that the best path to control is to split your enemy up so they cannot form a sizable enough force to oppose you. This has become a reality of the current Cyborg Era in which we live. No, I'm not suggesting that The Singularity has already occurred and our Robot Overlords are merely hiding the fact as they cement their position. The best scientific minds give us around twenty years, yet, for the super-intelligent uber-computer to invent itself. Nonetheless, I think it's still safe to say that a lot of the pre-work is already being done. Humans, it would seem, have a bit of a penchant for self-destruction.

Actual mech/organic integration is currently only happening in small, mostly-medical ways, with cochlear implants, pacemakers and the like. But the most important obstacle to full man-machine fusion has been and will continue to be the human mind, which is not set up for such an integration, and yet for some reason is participating in the re-wiring project. 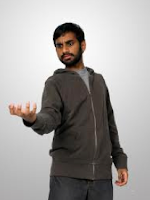 How do I know this? A hilarious little Indian guy told me, obviously.

Aziz Ansari, to be precise, who with atypical not-particularly-funniness rambled on in a recent interview (it's good: go read the whole thing -- unless you can't stand a little Indian guy who likes to swear) about the way the digitization of intra-human relationships is actually leading to greater and greater disconnect between people.

He referenced the problem of dissatisfaction brought about by too many choices, mentioned an awesome Ted Talk by Sherry Turkle that I'd watched last year about the loneliness created by all this digital connection, and also ruminated about the horrors of online dating.

None of this was particularly new to me, but Ansari jammed them all together in a way that resonated with me as a guy who lives in a shed writing, interacting with very few humans in the course of a day and only occasionally foraying out into the grotesquerie that is online dating.

For the past week, I've been writing emails with a woman from a town about 2 hour's drive away. She seems cool, I like her, her pictures make me say "hubba-hubba," etc... but the truth of the matter is, I don't really know her. She could actually be an overweight, middle-aged Comicon addict living in his mom's basement in Idaho, for all I know... but that's not primarily what I'm getting at, here. I am more referring to the fact that our "relationship" thus far has very few dimensions, and should therefore not be referred to as fully human.

It is as though she/he and I have plugged ourselves into a digital mediator, in essence creating a relationship that is itself a sort of a cyborg.

I am a member of the last generation of humans to have come through our formative years without smart phones or the internet. As such, I believe I still retain a sense of what it meant to be a non-cyborg human, which I think will make me an ideal voice for the Resistance, when the Cybernetic Integration Movement really kicks into top gear.

For now, though, I'm going to flirt away at the edges -- infiltrating the hive mind and studying its patterns and language, so I will be better poised to rise up against it On The Day. It's a dangerous, ironic game I play, posting this screed here to the internet. But as Edmund Burke famously said, "The only thing necessary for the triumph of evil is for good men to do nothing."

In the meantime, watch the following video. Prepare yourself, friend, for the coming robopocalypse: