How to Write a Movie 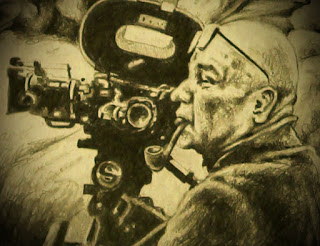 I know Present-day-Josh's credibility as a Screenwriting Teacher is suspect -- I mean, the dude's had, what, a short film and a music video produced...? La-La-Landee-frickin-dah!

But since the trajectory of his life is headed right for my eventual awesomeness (and since I'm far too busy flitting from one award show to the next), I figured we'd let him write this puppy and have his doggy day.

If that sounds cocky, remember that the first step to writing a movie is having the audacity to believe it's possible.

This is ludicrous. It's crazy to think that one person could sit down and invent a world, populate it with living, breathing characters, and then push those characters through a story so compelling that millions of dollars and the talents of hundreds of people will be spent to get that film before the theater-going masses.

Still, I'm just one person (and a pretty scraggly one, at that) and I did it... so maybe you can, too.

I've already written about the peculiar set of circumstances that set me on the path to screenwriting, so we'll just skip the causal train and drop you off right where you need to be to get started.

The first thing you'll need before you can write your first "FADE IN" is a well-stocked brain.

This brain will, of course, be crammed with literature and poetry (since screenplays are artful word-arrangements), but you'll also want to jam in a broad array of experiences, as much random information as you can acquire in a lifetime of wide-eyed curiosity, and a history of deep-thinking about whatever it is that makes people tick.

It's a matter of thoroughly priming the pump, so it'll have the juice to spray out all the stagnant, cliched ideas you'll have to go through to get to the good, sparkling ones down below.

Ideally, you'll have also tucked in some stuff about the craft of filmmaking (cinematography, lighting, sound design, acting, composition, color theory, etc.), but any old information will do, as long as you've managed to acquire it with some of your childish wonder, enthusiasm and love still intact.

Got a stocked-up brain? Good.

Next, you need to sit down and learn some of the basics of the form.

There are hundreds of books out there on screenwriting. With a little online research, you should be able to figure out which ones will best suit your needs.

Buy one of them. Read it, study it, absorb it, and then... burn it; because, while these books provide a great intro to the format and structures of story, it's all too easy to confuse forms with formulas, and to believe that screenwriting is a massive game of connect-the-dots. It isn't. Great writing is always transcendent, and if you're not going to shoot for greatness, well... shut up.

The next thing I want you to do is take the ashes of that screenwriting book, load them into shotgun shells, and shoot them at the poster for the screenwriting seminar you almost bought a ticket for, but now will not be attending. It's the sort of cathartic experience you'll need to survive what comes next, which is going to seem suspiciously like work. Because it is.

I'm going to assume that your well-stocked brain already has over a thousand movies in it -- movies you enjoyed with wonder as the unfathomable mysteries that they were and are.

This is good, but now you're going to have to try to fathom them.

You are going to have to start reading scripts; and not just reading them, but also thinking about them.

Read brilliant scripts that make you weep for joy after they're finished, and read scripts that make you want to scrape your eyeballs out with a bent fork after just a few pages. Read scripts while you watch the films they became, and try to understand why some script elements got cut from the finished product. Read to understand how the good ones conjured up good magic, and why the bad ones became a sorcery of pain.

This will not be a lot of fun.
I am sorry... but there are no short cuts. 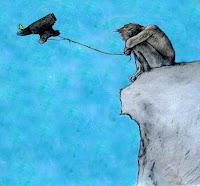 The next thing you'll need to do is to stop doing things. Just sit down and sink inwards, forsaking your real life in order to ponder out what it is you most care about -- the stories and dreams that animate your life and give it meaning. Figure out what you love most and what you simply have to write. You've got a long road ahead of you, and it will take a lot of love to get through the sort of agony you'll have to endure.

Got the Love? Good.

Time to start writing... sort of. Because before you can type "FADE IN," you've got to have some sort of framework on which to hang your story. Your brain is very small, and the story-world you're trying to create is very, very big.

So, make an outline.

Some people do sheets of paper, a lot do three-by-five cards, and some use white boards.  Me, I start with pencil on paper, transfer it all to cards on cork-board, then type the whole thing up and print it out for easy access. But whatever gets your brain juices flowing is fine.

Now you have to write the eff-starking thing.

This will hurt a bit, so you should just get it over with. Once I've started, I tend to write about fifteen to twenty pages a day, which means I knock out a first draft in about seven or eight days. You should know, though, that this is insane, and that NOBODY writes this way. Writing for ten hours straight every day for a week is not the way to get your best creative work down onto paper. I only do it because I'm racing the Fear of Failure Monster that's trying to grab me by the hair and toss me into a wood-chipper. I do NOT recommend it.

Like I said, though -- whatever gets your juices flowing.

Regardless of how long it takes you to write that first draft, just remember that you're allowed to chuck out anything from your outline that isn't helping you to feel the love. This is supposed to be a Creative Endeavor, after all. It's supposed to be FUN.

Got a script completed and a smile on your face? Good.

Congratulations! I've typed the words FADE OUT a lot more times than you have, so I know it's the best feeling in the world. Feel free to gloat... but just for a moment, because now comes the even harder part.

Ernest Hemingway famously said that "The first draft of anything is shit." He was right. Your first draft is terrible, and if you don't believe that, you've got no business writing movies. You have to be your own harshest critic. It isn't fair, loving, or cool to let your pride get in the way of your best work.

Fear not, though. You'll be okay.

There's a fix for that, and it's called "work."

I know, I know... you got into this whole shebang because you thought movies would be easier to write than novels, but I'm sorry -- any good work of Art is going to cost you. A lot.

So get back in there and re-write. Then do it again, as many times as it takes, until you can't think of a single thing that would make it better. Then leave it for three weeks and read it again with your heart and mind wide open. Listen to your own reactions. Root out the places where you're lying to yourself -- where you are covering up some ugly little part of your soul you don't want exposed.

Got it all hanging out? Good.

Except, I'm sorry. That's not going to cut it. Up 'til now, this has all been between you and the voices in your head.

Now, you're gonna have to walk your naked self out into public.

Take it easy, though, and start with a small public. Find your smartest, most literary and film-savvy friends and show them your junk. All of it.

If you can find even one person who loves you enough to read your still-awful writing and identify its weaknesses, you must buy them lobster dinner and give them back massages for a week. If this person is also somehow capable of quantifying those weaknesses into clear, insightful notes, and then sticking with you through your bumbling attempts to improve... well, you must quickly offer to bear their children, because these people are made of solid gold and shoot lightning bolts of glory from their eyes as they tell you again and again how stupid your stupid ideas are.

I happened to have found such a person in filmmaker/collaborator Austin Herring (check out his reel, HERE), but you can't have him because he's mine, mine, mine.

Don't worry, though. Your ideas are stupid, but you aren't. A person like Austin will only torment you because he knows this, and believes you can do better. Filmmaking is perhaps the most collaborative art form there is, and it is these early critical-compatriots who will push you to do your best work, and will stick with you throughout your career. I mean, check out that double-Oscar Austin and I just won this past year (wink).

Got somebody to point out how stupid your ideas are? Good.

Now that you've heard those painful outside-insights, you're free to write your screenplay again. And again. And again, until every line SINGS with the truth and every moment tumbles inevitably out of the moment that came before at a thumping, rhythmic pace to the glorious, inevitable climax--that explosion of ultimate truth towards which every word of your entire script has strained.

Are you there? Good.

Now all you have to do is find people who'll recognize how much money they can make off your genius (aka, "hard work"), get your script on film, and win yourself that Oscar. That's how I did it, anyways.

Because I'm FutureJosh, and I write movies for a living.

Thanks for being such an attentive student, random internet-person.

If you'd like to see what a film script actually looks like, you can mosey on over to THIS LINK HERE to read the first few pages of a couple of Present-Day-Josh's scripts.