Causality. Or: how to become a screenwriter in one, easy lifetime. 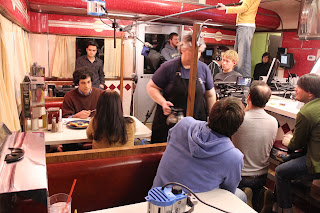 One of the nicest things about being born a human is that humans usually come one at a time, so nobody has to be the runt who dies for lack of milk. Nonetheless, I was born runt-sized on August 12, 1979, in Lancaster, South Carolina - the progeny of Ron and Marty Barkey. This was perhaps the most significant step on my path to becoming a screenwriter.

My father was an English teacher, see. He had a mother who was a painter, and a great-aunt who was a painter of some repute. He also had an older brother who came to be obsessed, as the years went by, with the oddly disjunctive hobbies of eschatology and family lineage, but since my own father never gave much of a rat's hoot about where he came from, I'm afraid that's all the creative ancestry I can give you.

Oh, except, my mother is/was a hyper-emotive, creative firecracker who loves drama and was responsible for nearly every play and musical I was forced to take part in, from my squeezing-out day in '79 and onwards. Her father was an avid reader and a dabbler in philosophy and theology, so my heritage on both sides was one of introspection, intellect, and creativity.

And did I mention I was white? Well, sort of a blazing, slimy pink at first, then morphing into more of a peachy, off-white color; but the point I'm trying to make is that I am the American, Caucasian child of two University-educated creative people who had the wherewithal to get me educated and literate, and did me the immense favor of moving me, six months after my birth, to Peru, South America.

This meant that while I was born a member of the most privileged class of people in the history of the world, I nonetheless was raised outside the status quo of my generation and class, in a place where books were the readiest means of entertainment, and where what televisions I did come into contact with were usually used to play films - a great many of which were (this being a missionary community, after all) products of the so-called "Golden Age of the Silver Screen."

As a result of all this, and because of my socially-inept nature, I grew up on a steady diet of books and classic movies, missing out completely on things like He-Man and those dear heroes of the Renaissance, the Ninja Turtles. Then, when high school came and I discovered the joys of cheap, pirated movies on the streets of the "developing nation" where I lived, my cinephilic tendencies began to flourish.

Zippedy-doo-dah forward to University in British Columbia, Canada, where I was enrolled - without my knowledge and somewhat against my will - as an English major. I can recall that on no less than three separate occasions in my freshman and year, I marched into the main office and insisted that they change me back to the "undeclared major" I had in fact declared myself to be when I had filled in their application. They promised to do so and didn't, so by my third year I gave up and accepted that English it was, and English it evermore would be.

This meant that not only was I being forced for the first time to read a lot of literature and philosophy that was not immediately enjoyable or accessible (read: brain-food), but I also had to write, regularly, on things about which I was both ignorant and uninterested. I found I had a knack for it, and although I graduated with a B.A. in English (minor in Art), it could just as well have been a B.S., with the facility I developed for writing quickly and convincingly(ish) on a whole lot of things I knew nothing about. I perfected a system for writing research papers with as little research as possible, and probably half my GPA was earned entirely through creativity and chutzpah.

Perhaps the best thing to come out of this was that I started journaling, which by the time I graduated had morphed into blogging and the development (eventually) of writerly discipline. But I'm getting ahead of myself.

First, I should say that I paid for my schooling by getting a job in production tree-planting, which over the next ten summers not only hugely shaped my character as a dirty, uncivilized beast, but also introduced me to a young man named Ryan, whom I interviewed for a planting position whilst I was foremanning crews. Ryan later got me a job serving alongside him at the Olive Garden in Langley, BC. Because of this, after I had un-enrolled from a Master's of Art Education in BC and moved instead back to North Carolina, I ended up transferring to the Olive Garden in Rock Hill, South Carolina - where I met actor, director, and producer Austin Herring.

While we worked together, Austin mostly just made fun of my inexperience; but later after I'd gotten a teaching job and he had been fired for incompetence (or maybe incontinence), he called up to whine about some woman who'd kicked the excrement out of him. Since we both were into art, theology, philosophy, and whining about women who'd kicked the excrement out of us, we bonded. It was Austin who suggested I might want to turn my meandering pencil to screenplays, and since I was just coming off a Hollywood High from a few months spent moonlighting as an extra in film and television up in Vancouver (Hollywood North), I thought I'd give it a rip. I'd recently had my heart torn from my chestal cavity and was writing about a thousand words a day to try to staunch the blood-flow, so I figured one more creative outlet would be just the thing.

Around that time, my roving-gypsy sister, Hannah, dragged me out of my depressive man-cave to a Halloween bonfire at the the home of some childhood friends, the Harveys. While at this bonfire I got to talking with Aaron Harvey, the artist-son who was about my age and had moved to L.A. to break into the movie biz. Aaron had bought a couple of my paintings when I'd moved down from Canada, but other than that we really hadn't interacted since I'd given him my ratty, yellow Nash skateboard back in the sixth grade. As it turned out, we shared some interests (making fun of "Christian" films. for example), so he suggested I send him some of my writing so he could read it. I did and he did, and then he suggested I try writing some short films for him.

Although by the time I got around to it, Aaron was distracted by his next big film project, Austin was ready and willing to help me whip my very first screenplay, Fork, into shootable shape so it could be produced, packaged, and shipped off to a pile of festivals (fingers crossed).

As it turns out, Austin is probably the most versatile and broadly-knowledgeable of the local independent filmmakers, and has over the past year or two been massively helpful, teaching and mentoring me as I've attempted to learn the craft of film-making. In that time I've cranked out two more short films (now in pre-production) and one feature-length that Aaron loved and is going to help me shop around L.A. so I can get my foot into, in his words, "bigger doors than [I'd] otherwise be able to access."

The point of all this is to say that if I were a betting man (which I'm not) and a fatalist (which I'm not), I'd bet it was pretty much my fate to become a screenwriter, and that some outside Entity was pulling some mighty appreciable strings.

Since I am neither of those things, I choose instead to return to my Artist Analogy, and to suggest that in the grand tapestry of Everything, it would seem that an appreciable number of strings have been woven somehow into a confluence of events that make writing for film a very good fit for me, and a lovely way to spend my evenings.

Stories are awesome, magical, mystical things; and although I have no idea what I'm doing, I love every second I get to spend in this world of words and stories and - if The Artist wills it and the creek don't rise - film.
Labels: art film identity