In Defense of Dirty Screenplays 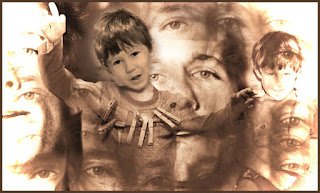 Have you ever been accused of plagiarism?

I have, by a battleaxe of a professor named Dr. Pell (from Hell, she said) who took it upon herself to drag me and another student into her office and bludgeon us with accusations that, when they were proved to be insubstantial, were replaced with a general maligning of my intelligence and work ethic.

If I'd been thinking straight, I would have realized that if she'd had a legitimate plagiarism charge to level, I'd have been up against an academic committee... not being blasted, privately, in her office.

And if I'd been thinking straight and with the wise cynicism of nearly twelve years of hindsight, I would have realized that the real reason I was being curmudgeoned was that she just plain didn't like me.

Perhaps if I'd known these things, I wouldn't have bothered trying to defend myself, thereby prolonging that experience by an unecessary thirty minutes.

Being by nature a flyweight conflict-shirker, it was my usual practice to do everything I could to avoid disagreeing with an authority-figure. In this case, though (aware, as I was, that in academia plagiarism is a hanging offense), I took the foolish tack of trying to point out why her assertions were nonsensical, and had to endure a backlash that made me grind my teeth, as my fellow defendant wept openly.

Since this was, as I have said, a spurious accusation, the charges evaporated after the Battleaxe'd had her chance to feel tough at our expense. That's all water under a bridge I burned a long time ago; but the funny thing is, I ended up taking her side on the very disagreement that sparked her dislike of me in the first place.

Then I took her side about seven steps further than she'd probably ever intended.

If you are one of my besties (a.k.a. internet stalkers) then you'll know that I've been using my twitter feed to record daily work on a script I've been writing, and writing, and re-writing. And as I've crept slowly toward completion, I've realized that I have written a movie chock-full of just the sort of dirtiness Dr. Pell was defending when she wrote the essay, "Should Christian's Read Dirty Books?" that I so foolishly took issue with on the first day of Modern North American Fiction.*

When I say that I am taking it seven steps further, it is because I think she was probably only trying to argue that Christians shouldn't be disengaged duelists, and ought to meet culture right where it is. Since culture at large isn't the white-washed sepulcher you'll often find in the Modern North American Fiction that is Evangelicalism,  the best novels being created often include things that dainty little Evangelicals aren't supposed to be exposed to, like profanity and (gasp of all gasps) sex.

At the time, I wasn't ready to hear that message; so I feigned indignation, hid my secret titillation, and pulled off one of the worst grades I acquired in the course of my B.A. in English Litra-Chewer (the other was in her other class).

When I say I took it seven steps further, it is because I've written a movie rife with that sort of thing, and I have no particular justification for it.

I didn't write it for the purpose of "engaging culture for Jesus." I wrote it because I like writing, and this story presented itself to be written.

I didn't write it to show that the swearing and violence and sexamackee my characters were doing was tsk-tsk arffull. Rather, I wrote my characters behaving that way because I'm trying to learn how to tell a true, fictitious story, and THAT'S HOW ACTUAL PEOPLE ACTUALLY BEHAVE.

I'm sorry, did I slip into all caps there, somehow?

Perhaps that's because, like I said when I was arguing that the movie FIREPROOF is immoral, it makes me angry when artists intentionally paint a dishonest picture of the world.

For reasons unbeknownst to me, the Divine Brotherhood of the Ya-Ya CreativePants decided to gift me with the grain of a heist/ganster/psychological thriller-story, a story that has gradually become populated with the sort of people who swear when they're angry and aren't averse to a bit of a sheetsy tumble when they're in the mood for a dopamine fix.

I would love to write intriguing, gutsy dramas that enlarge the human spirit and make you cry like I did when I first read KRAMER VS. KRAMER, but the facts are as follows:

A. I am a baby of a screenwriter, and
B. That's not how creativity works.**

I'm being needlessly defensive here, I know. You're my besties, after all... you're certainly not judging me for it.

My Childhood Self (being the spawn of Evangelicalism, raised in the bosom of Christian Missions) IS judging me for it, though.

My CS says that even though I wrote the sort of movie I very much do enjoy watching, I ought to be embarrassed for giving several months of my life to something that's basically just a cracking good yarn about naughty people. My CS says that if I do manage the miracle of selling it and that miracle compounds into the further miracle of it getting made, then I'm going to have to be ashamed in front of my Chilhood Friends for writing something that doesn't end up with the words: "And then Jesus healed them of their iniquities, WHEEEEEEEEEEEEEEE!"

This post, then, is a preemptive strike against my judgey Childhood Self who - while not the irredeemable caricature he's been made out to be in pop culture America - is nonetheless a bit of a foolish poo.

Maybe Jesus told a dirty joke once in a while - I don't know. My characters sometimes do, though, because they're flawed... just like me. That's what makes them interesting.

That, perhaps, is why I love them.

*Note to twenty-year-old self: academics' livelihoods and identities are bound up in their published work - tangle at your peril.

**Ostensibly, over a lifetime of work I'll produce film scripts that reflect all aspects of who I am - including my faith. But good art is a miracle; and as everyone knows... if you rush an artist, you get rotten miracles.
Labels: film religion writing