In Defense of Dirty Books 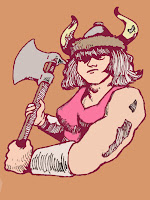 I want to say that Barbara Pell was a battle-axe of a woman, but it would probably be more accurate to call her a sledgehammer wielded by a nine hundred pound gorilla on a banana rampage. Although it may be uncouth to speak of the dead in this way, let me add that Dr. Pell not only did not mind her reputation as a bonecrusher, she did everything she could to encourage it.

I remember the day she walked into freshman English and opened by saying, "Hello, class. I am Dr. Pell. They call me Pell from Hell, and you'd better believe I deserve it."

That semester, I learned that the rumors were true - that she was indeed a hard-swinging smasher of foreheads who did not much like male students and did not mind flinging out Cs, Ds, and Fs as though it was her role in life to assure us that we were dumber and lazier than we thought. Thankfully, Dr. Pell was not my first hard-nosed English teacher, and I managed to mostly fade into my chair and slide by with a B-.

Then, in my Senior year of University - in order to prove my inability to learn anything the easy way - I signed up for another class with Dr. Barbara "The Sledge" Pell. By this time, I had grown some, er... opinions, so when in the first week of Modern North American Fiction she handed us an essay she had written entitled "Should Christians Read Dirty Books?" I did the unbelievably foolhardy thing of categorically disagreeing with the basic premise of her (published, pet) article... out loud... in class. I gave her the whole "garbage in, garbage out" line and all but began singing the Christian nursery-rhyme song that basically begins with the the words, "oh be careful little eyes what you see," and ends with a reminder/threat that there is a God located somewhere above you who is looking down, watching you with the vigilance of Santa Clause in the weeks preceding Christmas.

I am not going to say for sure that this is why (after steamrolling my timid, developing voice) she decided later in the year to accuse me and another student of plagiarizing each other's papers on the same assignment (I mean, come on! Is anybody really that stupid?), but suffice it to say that I was supremely grateful that Dr. Pell-from-Hell was a close, personal friend of my faculty advisor, a woman of roughly the same age but with a polar-opposite temperament, who loved me to crazies and convinced the Pellmeister that she needed to look elsewhere for her pound of flesh.

You never really know, though, the impact that a teacher will have on you. When I began my Fiction Fridays series last week, I realized that I was now in the awkward position of writing for my blog in a form that, I believe, may very likely require me at some point to use curse words and perhaps describe in lurid detail certain actions and behaviors of which Momma Church would most certainly not approve.

This is because while a blog is my voice and I am usually a (perhaps paranoiacally) well-behaved young man, when I begin to write fiction I am not using my own voice. Rather, I am creating a fictional narrative voice that may or may not be the same as my own, and am using it to describe the words and actions of characters who are not - if I manage to succeed - myself. They will all carry a part of me within them, yes, but they will not be me.

In order to write these people well I will have to love them well, which means that I will have to let them be themselves. Love does not control others, and art is also not about control. Art is about love. It is about taking a journey without knowing the end, believing in faith that somehow, through the process, something good and beautiful and true will be affirmed.

As I thought this over this past week, I could not help but hear Dr. Pell's hard, granite voice echoing from beyond the grave. I could not help but realize that she was, in fact, correct. For writing to be true, it has to be real. The Bible itself - if you want an example from the Christian tradition - provides ample evidence of that.

An artist cannot scrub life so that it will fit into a predetermined, idyllic vision of what he wished it was. I am not a puppeteer; I am a vehicle of grace, a lowly experimenter on the road to I-know-not-what, a sub-creator seeing through a glass darkly and making something of the stuff of my life that I hope points, ultimately, to more hope.

You were right, Dr. Pell. I was dumber and far more intellectually lazy than I thought. Christians should read "dirty" books and, perhaps, even write them.
Labels: books fiction fridays writing