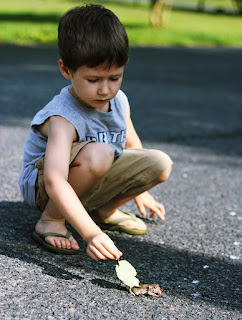 Q. Why didn't the toad cross the road?
A. Because it was dead.

The picture to the left shows my son placing a leaf over a roadkill toad on our walk yesterday; so that - as he put it - "it doesn't get cold." Now, my son knows what death is (at least, he knows as much as I do), but there was something in that gesture that seemed to me to be hopeful... beautiful.

I've got this Book of Questions I pull out sometimes, to gloss over socially awkward moments. Question # 63 asks: "Assume there were a technological breakthrough that would allow people to travel as easily and cheaply between continents as between nearby cities. Unfortunately, there would also be 100,000 deaths a year from the device. Would you try to prevent its use?" It's a fascinating question which, in the book's appendix, has these somewhat inevitable follow-ups: "In the mid 1800s, had you been able to look into the future and see that the automobile would cause 5 million fatalities in the next century, how would you have felt about this new device? Is there scientific knowledge that is best left undiscovered?"

My good buddy Jonathan told me I was being melodramatic when I wrote about the roadway system as a network of black snakes of death, writhing over the whole country. He was right, too - my life depends, after all, on those black snakes of death; so to call them out like that is a bit of a reality-defying cry for drama. Without roads and automobiles, I wouldn't have the ingredients to make a pizza, tonight. Nor (double bummer) would I get to feed that pizza to my lovely lady-friend.

But there is still something that doesn't sit right about all this. I am once again reminded of that Jurassic Park moment where Jeff Goldblum says, "Your scientists were so preoccupied with whether or not they could, they didn't stop to wonder if they should."

What if we'd slowed the pace of our our roadway/automobile development and insisted on holding off on new technologies until we'd found a way to make them safe for both ourselves and the earth? What if, as a result, our urban and suburban "communities" had been designed to meet not the needs of the automobile; but of people, plants and animals?

We can't go back to the mid-1800's. We can't push re-do. But we can ask, moving forward, what technologies it's just not worth the damage to develop. While my son will undoubtedly never live in a world without automobiles - a world where animals won't die by the millions for the crime of trying to cross the road - perhaps he can live in a world where the next great innovation is made with moderation, patience, and a little more love.