death on the asphalt 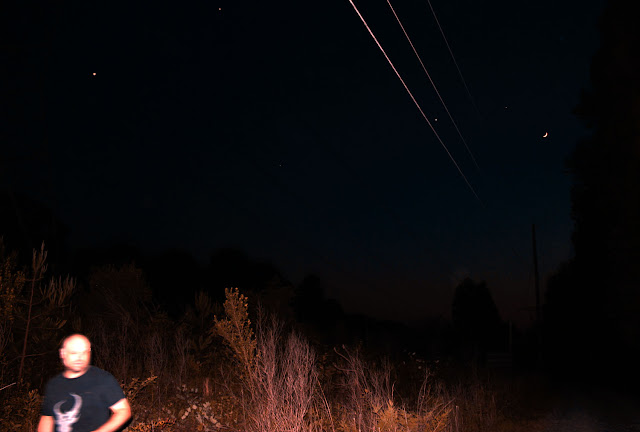 A couple nights ago, I went for a walk up to the corner store and got a little lost for two hours. A childhood friend of mine moved into the area recently, and we decided to go for a short walk to explore his neighborhood as the day fell. We made it to the corner store and then kept on going, eventually finding ourselves wandering down a rural back road in the dark, wondering if it might be faster to retrace our steps, but enlivened with a spirit of adventure to keep wandering on into the unknown.

We talked of how the chorus of frogs and crickets calling out through the warm, humid night air reminded us of our youth in the Amazon, and of how good it was to live in a place where the artificial glow of a city did not choke out light of the stars, where we could wander an unknown road and feel alive in a somewhat fuller way.

I was wearing the Australian boots I'd been given in Sydney last year, and although they are perhaps the most comfortable footwear I have ever owned, they are not made for long slogs down hard asphalt roads. As blisters began to form, I started to think once more of the ugliness of roads - how their snaking black fingers make up a web of death that blankets this entire continent. I thought about the hundreds of thousands of people who die on them every year, and the millions of animals, and of the wars fought over the dead-animal, fossil by-products with which they are made.

And then we saw it - practically stumbled over it, in fact, in the dark of the night. A dead rabbit. 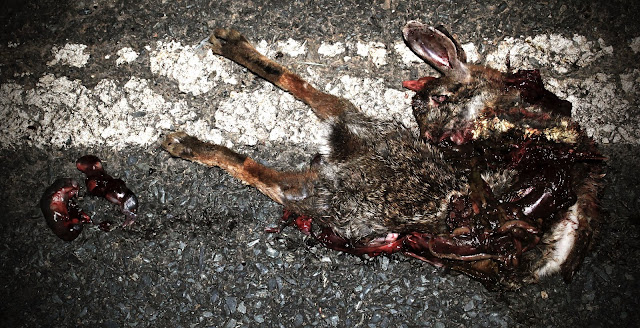 I mentioned to my friend how I'd once had the idea to photograph roadkill... to force myself to stop and document each asphalt death I saw. I would then blow the pictures up huge, rent a warehouse and have a gallery show, a carnival of the grotesque, a testament to the ugly collision of "progress" with a natural world that never saw it coming, and couldn't have done anything if it had.

So I took this picture.

As we walked away, I zoomed in on it in my viewfinder and saw, to my chagrin, the dead baby bunnies. In a twist somehow more disturbing to me than even the pointless death of this creature and her young, I found that I was not disturbed. Not really.

There was a time, possibly, when the death of a rabbit by the road would have had a visceral, emotional effect on me. Now, though, anesthetized as I am to all of this by constant, rolling exposure, I am no longer able to summon the emotional wherewithal to feel anything for these creatures. A dull, intellectualized sorrow sits in their place. I took a short road trip, recently, with a woman who does still feel, and although at the time I appreciated her sensitivity, I found that I could not share it.

When I mentioned my surprising lack of feeling to my friend, he shrugged it off. "It's not a bad thing," he said, "or a good thing. It's just something random that happened, like everything else."

I started to point out the reasons I thought this rabbit's death ought to bother me, but he interrupted. "Okay, he said, maybe it is an unnecessary waste, a useless death, but..."

As he trailed off, I thought of how different we had grown. Both of us creators and artists. Both of us lovers of people, of the wild world, of literature and of deep thinking. And yet there, confronted as we were by the death of a rabbit, we had each chosen to mark the moment in different ways. He, to deny somewhat the wrongness of it, and I to fall into a deep, cyclic mental funk. I want to "wail, for the world's wrong," but can't seem to muster more than a sullen, detached mental discomfort. My friend, on the other hand, accepts it all as part of a big, pointless mess.

And all I seem to have to fall back upon is the heart's cry that "NO... this should not be."
Labels: nature