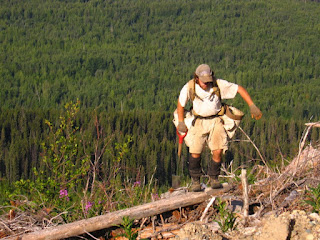 Back when I was using my exceptional powers of manipulation to push crews of young men and women to plant millions of seedlings in the cut-blocks of British Columbia and Alberta, I spent a lot of time emphasizing the Power of Goal-Setting.

See, I was a pretty sucky tree-planter, at first. I don't know if that's because I was a lazy, ninety-pound wuss, or just that I was stupid; but I could never seem to focus long enough to have more than a piddling planting day. Which is depressing, considering how miserable it is getting paid pennies per tree to strap on bags stuffed with sixty pounds of cold, wet seedlings and plant your way up a steep mountainside in rain, sleet, hail, snow, blistering heat, and bugs.

On more than one occasion, I found myself ardently wishing for a bear to eat my head.

I had my larger goals (paying my way through college, not sucking, et cetera), but found they didn't keep me from "the rookie stare," which basically consisted of getting poorer by the second as I stood there with a blank look on my face, fantasizing about drinking a slurpee out of a beautiful woman's belly button.

Eventually, though, I'd had enough. I set my watch to beep every five minutes, and then spent my day chanting "I am the Master of my own destiny, and I will plant until I die!" over and over, trying to pound in as many trees as I could in each five-minute segment. By the end of the season, I'd pretty much lost my my mind... But I was also a real planter, bound for all the glory and soft-tissue damage that were the due of a tree-planting "highballer."

Three years ago, I decided to become a screenwriter. There was a problem, though. I was working a full-time job, and a great deal of what free time I did have was spent caring for my infant son. It seemed impossible. I had some great connections, and some really talented people who were willing to help me along the way, but there was never enough time. So I did what any good, ten-year treeplanter would do: I broke it into a bunch of tiny goals.

First, I started working my way (slowly) through several books on screen-writing. I began writing short films, too, and began laying down the beats for my first feature-length film. I took it one small, hour-or-two session at a time, and in January, 2011, we shot my first short film. In September of 2011, I had finished the first draft of my first feature, STAR STRUCK, and was really feeling the weight of my ignorance.

By this time, I had begun listening to SCRIPTNOTES, a podcast about screenwriting and things that interest screenwriters, put on by John August and Craig Mazin - a couple of guys who've written a bunch of movies you've heard of. In this podcast, they recommended that aspiring screenwriters stop wasting their time on books about screenwriting, and start actually reading screenplays. John suggested reading a hundred screenplays, and I thought, "Ah-hah! A goal!" So, five months ago, I started reading my first of the one hundred scripts I promised myself I'd get through before I started knocking out my next feature-length. I wrote a few more short films, some short stories, and a whole lot of blog posts. Mostly, though, I read, and read, and read.

By March of this year, I'd finished my umpteenth draft of STAR STRUCK, and had it ready (fingers-crossed) for the Hollywood meat market. A producer friend in LA had been sending me un-produced scripts, written by some of the best (and worst) writers in Hollywood - some that his company was considering - and I was sending back brief notes on each script. The experience was helping my own writing immensely. I kept on plowing, and two days ago finished my one hundredth script.

Yesterday afternoon, I sat down for a first meeting with Austin the Director, with whom I am co-writing a new feature. And last week (I cheated, a little), I started beating out the scenes for a script I've been mulling over for a while, now.

I still have a long, long way to go. If anything, the task has gotten larger as I've expanded my awareness of both my own ignorance and the size of the mountain I have yet to climb. Still, each step taken is one step less that remains, and my enjoyment grows as it all becomes... not less mysterious, but somehow more doable.

If you've got a goal too big to accomplish, then, my advice to you is this: break it into little pieces. Eyeball a landmark and trudge up that incline. Set your watch for five minutes, and start pounding.