from sex to death

Last year I had a horrible, mixed-up, no-good, very bad day that crescendoed in the violent, senseless death of a little bunny rabbit against the bumper of my car. So I took a picture. This picture. You might find this weird, but it's actually a sort of thing of mine to take pictures of dead animals - especially animals that have died on the black river of death we call our national roadway system.

It's not a morbid fascination, I don't think, but rather a desire to commemorate what we have lost through our seemingly endless, thoughtless acceleration into the future. I want, in my own small way, to memorialize these innocent and voiceless victims of our progress.

You'll lynch me for saying this, but I think there's something beautiful about death. Not in itself, but in the way it contextualizes the rest of life. Sitting on death's doorstep in these our most mortal moments, it is as though a camera's focus ring is turned. Suddenly everything becomes sharp - clear. We remember that what we value most is not the stuff and nonsense comprising the illusion we call "success," but rather the joy of life itself - of relating and loving - of enjoying the sheer pleasure of breathing in the air of This Good World.

Two days ago, I was leaning on the fence-post by the strawberry patch on our acreage, chatting with my dad, when I spied this egg sitting, delicately, on top of a pile of leaves. I picked it up and saw, through a hole in its side, the form of an unborn bird. There were no trees or nests nearby, and no clue as to how it came to be sitting there on the pile of leaves. It was a mystery - like death itself.

I think it is appropriate, somehow, to follow a post on fear of sex with a photographic meditation on the mystery of death; which is perhaps our most prevalent, most under-girding fear. The picture below is not an answer or a solution - it is a reminder to pause, reflect, and consider. 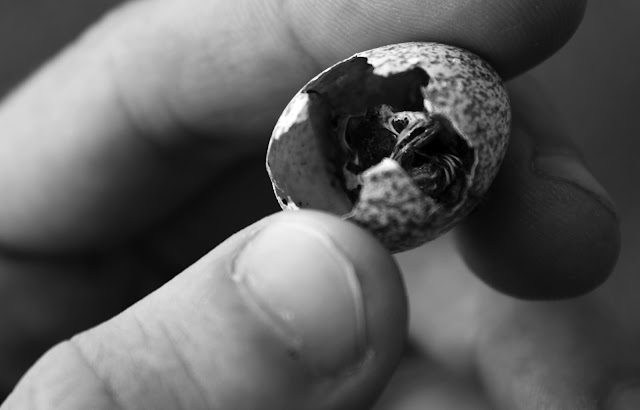