When he was in his early twenties, Diego Velazquez—who is now in all the Art History books—painted a masterpiece called "The Waterseller of Seville." And in my early(ish) twenties I painted a (modified) copy of it that wasn't half bad.

How the heck did I even do that?

I mean, sure, there are a ton of painters out there who are way better than me, but I was just some kid from the jungle with basically zero early formal art training, who minored in Art at a college that didn't even have an Art major.

My teacher, who was an accomplished visual artist in her own right and had a Master's degree in the education of gifted students, took me aside one day and said, "Josh, I'm only going to tell you this once, but you're better at this than the other students so I'm going grade you harder and push you harder than I do them. Because I think if you wanted to, you could probably make a living as a visual artist."

So what do you think I did?

Did I dive right in and devote myself to the craft? Did I begin a rigorous program of study that involved a daily regimen of technical exercises? Did I apply to workshops and graduate schools and residencies? Of course not. I just kept painting and drawing in (gradually decreasing) fits and starts. I watched the vigor of my youth become the vinegar of my old, old age (ha!).

You know why I did that?

Because I was afraid.

I was afraid that my art teacher didn't know what she was talking about. That I didn't have what it took. That it didn't matter what I had, because the Art world was a cruel place with no room for a kid who knew more about catching piranhas and paddling a dugout canoe than navigating the thorny paths of commerce. When people asked to buy my art, I usually just hemmed and hawed, then told them a price that amounted to half minimum wage for all my hours of work.

When one guy asked me that question, I said I'd take whatever cash he had in his pocket... which turned out to be sixty bucks.

That's not the point, though. Art is not about money, and it's important for art to go to people who will love it well—regardless of the size of their bank account. Furthermore, the world doesn't owe anyone a living in the Arts, and making a living isn't the point.

Fear stops you from loving yourself and valuing your work. Fear stops you from being able to focus on your work enough to make it really good. Fear deflects you into television and social media and a million other consumptive activities that allow you to pretend the fear is no longer there—that you can make fear disappear by just ignoring it.

But fear doesn't fade in the darkness. It grows.

Fast forward to the end of my twenties. Divorce. Ugh.

Divorce, but also an epiphany... 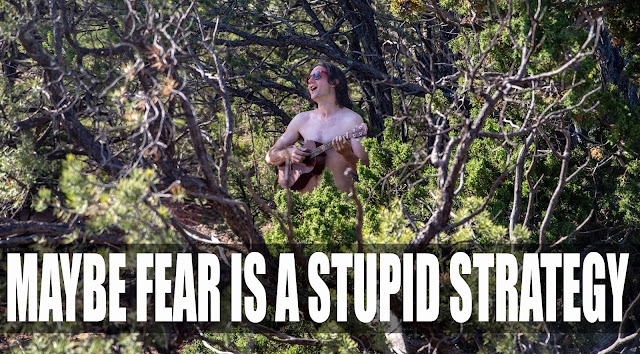 I had majored in English at college, mostly because I loved books, but I had always thought that storytelling was for mystical magical people who had a superpower. But after my divorce I thought, what's the worst that can happen? I've already been brutally worked over by this P.O.S. experience, so why not just give it a shot?

So I gave it a shot.

I have now written around sixty short stories, twenty-two of which I collected into a book. I've also written a forgettable memoir and three less-forgettable (I think) novels. I've written fifteen feature length film scripts, and around twenty-five short films. I've made a few picture books. I've helped produce seven short films from scripts that I wrote or co-wrote, and I was lead producer on one feature film.


I've banged out probably around a million words on this website, and several hundred thousand on other websites, as well. I've even made a little visual art.

I am not yet making my full living as an Artist.

I am still rather afraid.

But as we all know, courage isn't the absence of fear. Courage is doing what needs to be done, despite the fear. Courage is loving yourself and the work enough to push past the fear and Just Keep Making.

I've even tried song writing—which is sort of insane, given that I quit both piano and guitar when I was a kid, and am almost completely ignorant when it comes to how music actually works. This ignorance regularly brings to the surface serious feelings of inadequacy... which snowballs into fear of rejection and failure and a general sense that I'm going to die without ever producing anything worthwhile, and all my creative efforts are never going to amount to anything. A big, stinking ash-heap of wasted time.


That doesn't matter. Well, it matters, but only inasmuch as it is an opportunity to confront my fear and face the Lie of Worthlessness. To respond with love for myself and for the Act of Creating and for Creation itself.

Love is the answer. Love is the antidote to fear—it drives fear out the door and far away. Not forever, but at least for long enough to both make something beautiful and learn a bit more about the fact that I'm not just lovable... I'm an Awesome Work of Art!

So here's to another decade of Love casting out fear.

Here's to a decade of Making.