Depending on what kind of music fan you are, this story may make you want to punch me in the face.

In the early 2000s I was living in a dilapidated camper/trailer in my friend's back yard in Maple Ridge, British Columbia. It was winter—which in British Columbia means it was drizzly-cold and gray most of the time—and it was on one of those dark, drippy evenings when my friend Kirsten called and told me I had to get down to Vancouver that night to see her boyfriend's band play a show. I think the venue was Richard's on Richards, but the details are a bit hazy.

What is not hazy is Kirsten's enthusiasm for the band, with which she was at the time touring the country—handling their merch table.

"They're really, really good," she said. "Nobody knows who they are yet, but they're totally gonna be famous. Come on down. You can hang out with me and the band in the green room and then afterwards we can maybe do something. But seriously. They're awesome. You'll love them."

So, yeah. Girlfriend thinks her boyfriend's band is awesome. Yawn.

But Kirsten was a good friend and I did want to see her, so as I recall I got in my car and started driving west, toward the bright lights of Vancouver. Or maybe I didn't. Maybe I'm remembering that wrong and I didn't even try to drive that way. Maybe it wasn't the traffic or the rain and fog that turned me back. Maybe I just didn't feel like driving an hour downtown to struggle finding a parking spot to see some band that might or might not suck. Either way, I didn't go.

Later, Kirsten's brother told me he'd been to one of their shows (not the same one), and that it was the only time he'd ever cried at a rock concert. The music and their performance was just that good.

The band was Arcade Fire.

Arcade Fire is awesome in way more than just a "my boyfriend's in the band and he looks sexy with his guitar" sense. Their music videos have been viewed over a hundred million times on youtube. They were nominated for an Oscar for their score of the movie HER. Their debut album Funeral (which was coming out right around the time I did not go to see their show) is widely considered by music critics to be one of the greatest albums of the 2000s. 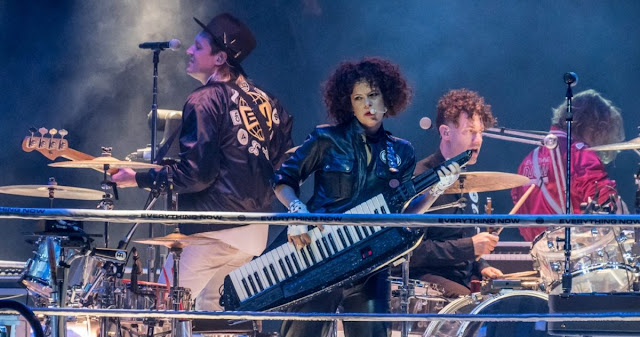 Kirsten and her musician boyfriend broke up a little while later. Although I now own several Arcade Fire albums, I never got to see them in concert or to hang out with them in their green room.

Do I regret this?

I do not doubt that if I had gone to that concert that evening and seen Arcade Fire play and hung out with the band, it would have been a memorable experience. A good time, probably. Perhaps Kirsten's boyfriend and I would have hit it off. Perhaps we would've stayed up late talking art, religion—whatever, and perhaps that conversation would have been a seminal one in my life. Perhaps it would've redirected my path in a way that would have me today living in a commune in New Zealand instead of a detached apartment on my parent's property in North Carolina. Perhaps I would be making massive artworks with paint smeared all over my naked body. Perhaps I would be unmarried, with no kids, trying (and failing) to learn to play the didgeridoo.

Or, you know, perhaps my car would've hydroplaned on a puddle I didn't see because of the streetlights, and I'd now be drooling out the side of my mouth in some institution. Or dead.

My life is filled with these pivotal moments. Moments where I said or did what now seems to be the wrong thing, and that I could easily look back on with despair. Not just great opportunities I missed for no good reason (like that time that friend invited me to a free weekend at a luxury cabin with him and his son in the mountains of Arizona that I turned down because... I was tired?), but also things I didn't do because at the time I was a tightly-wound-fundamentalist-purity-ethic-nimrod who was too afraid of making a single moral error to ever really live.

And then there are the times when I did fail, morally speaking. Like when I neglected to visit my sick friend before he died, or that time I didn't stand up to that man I saw beating a woman on a sketchy Amazonian back road, or even that little Korean girl I didn't open the door for back in elementary school in Calgary, Alberta.

Each of those potential-regret-moments carried their own infinite potentialities. A slightly different choice in any of those situations could have carried me away, away, away to a completely different life. But even if at these pivotal moments, I'd made what seem in retrospect would have been better choices, who's to say where they might have led?

What sort of painful life experiences might I have thus avoided?

If I think too hard about that in the context of the decisions I'm making today, it's easy to get lost in the terror of the what-ifs. But if I get all Zen about it and blather on about acceptance and humility, making some reference to Divine Will or The Inscrutable Intentions of the Universe, it's just as easy to become overwhelmed by a fatalist despair.

I want to finish this off with some lesson about acceptance, and maintaining hope in the possibility of positive change. Or to say something about how if I'd gone to that Arcade Fire concert then I maybe wouldn't have spent an hour this morning jostling my smiling, beautiful three-point-five month old boy on my knee, as my beautiful wife caught some extra sleep in the back room of our cute and cozy little North Carolina house with our two working vehicles and our health and our small-but-enough cushion of money in the bank.

I want to end by saying something about how this life—the one I've got—is better.

But the truth is, I don't really know. I don't even know what "better" means in that context.

I can't know what might be, all I can know is what is.

I keep going back to the last letter I got from one of my favorite authors of all times, David James Duncan. In late 2016 I'd banged a guts-hanging-out letter on my wife's typewriter in which I asked Mr. Duncan if he thought it was even worth it to try to write stories in the face of the Spreading Darkness of Everything.

Apparently my fear was splashed all over the pages of my letter, because in his response he called me on that fear and suggested an antidote:

Mr. Ducan included a W.S. Merwin poem with his letter, which I'm going to paste in here without permission because dangit, you need it as much as I do.

dark though it is

His dad was a Presbyterian minister, so Merwin grew up like I did and like David James Duncan did—in church, and more worried than he ever should've been about always having to do the Right Thing.

W.S. Merwin did not always do the right thing.

Without even meaning to, however, he did have something beautiful to me to say about my regrets. They're there. They exist. They and all my other choices have shaped me into who I am in this world, and that is the way it is because of these choices and all the other choices that all the rest of you have been making as well. And it's a sucky world in a lot of ways because we've all made a lot of bad choices.

I could easily spiral down endlessly into dank, gray despair by dwelling on that suckiness, but what would be the point?

Where would that get me?

So instead I'll try to finally take Mr. Duncan's and Mr. Merwin's advice and develop a discipline of gratitude. I will say "Thank You" and wave.

Dark though it is.
Labels: gratitude music philosophy relationships