a river in Egypt

Five or six years ago, an old friend of mine posted a video to Facebook that depicted him participating in the killing of several human beings.

Comments on the video were immediate and congratulatory, with enthusiasm over the efficiency and efficacy of the killing. Most of the people who were commenting were also old friends of mine. Most of them professed to be Christians. And as I recall, a good number of those people went on to become avid social-media supporters of Mister President Man-Baby.*

This was back before it had become too painful to me to watch professing Christians betray/violate/torment the Jesus they claimed to serve, again and again. Before I left Facebook behind in disgust.

So I commented my displeasure.

I'm not sure exactly what I said, but it was something to the effect of yeah-sure-whatever, I get that you're the pilot of a military helicopter over in some war-torn country, but posting to Facebook (where children like to hang out, for-literally-Christ's sake!) a real-life video of yourself pursuing and then destroying a moving vehicle might not be a great idea.

And cheering about it isn't appropriate.

As I recall, I took the debate off-site, engaging in a long, hair-pulling conversation with my old friend in which I tried to argue for the value of all human life and the tragedy of taking it. In which I tried to convince him that perhaps not all the killings the American people were condoning and financing in the Middle East were righteous. That, for example, the over one hundred thousand civilian deaths in Iraq and Afghanistan were less a cause for joyous celebration and more a source of deep national shame. That perhaps sackcloth and ashes might be a more appropriate response than posting videos to youtube and crowing about your "great shot."

My arguments, as you might imagine, fell on deaf ears.

Convinced I would never win my old friend over to my way of thinking, I shifted the argument to an attempt to get him to at the very least pull the video off Facebook, as he could of course see my point that it was not really appropriate content for children.

He could not see my point.

This was, after all, his real-life world. He was out there, risking his life for what he'd been told since he was a small child (coming, as he did, from a military family) was the good of the country. This friend had spent his early years marinating in a blithely anti-Christian sort of patriotism.

He agreed to take the video off, though, in deference to our friendship.

For that, I am grateful.

He was several years older than I and it's not like we ever really knew each other all that well growing up, so his actions showed an extra degree of kindness that I can appreciate.

He wasn't and isn't an unkind person. 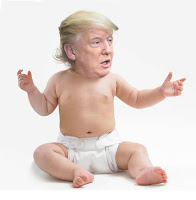 This is perhaps the question that most presses on my spirit, these days. The question that most makes me want to condemn (for now and forever) the religion and people of my childhood. But these are my people. I have to at least try to understand, right? To attempt to make sense of the fact that they have voted to give nuclear codes to a psychopath.

We know about fear. We know a bunch of chicken-livered people with economic anxiety and fear of diminishing social capital were willing to deal with the devil for a tiny shot at restoring a little (possibly imagined?) cultural influence. That's old news.

So let's talk about denial.

Let's talk about how somebody can spend their whole life reading and hearing about a God of Love and his upside-down, turn-the-other-cheek Kingdom... and then turn around and gloat about the killing of other human beings in public.

Life is short, and we are small. There is very little that we ever actually know, and this wild ignorance produces a well-documented death anxiety. Tiny me is going to die and therefore... I need to matter. I need what I am doing today to have some sort of transcendent significance, or what's the point? It starts with an irking fear of death and becomes a lifelong significance-project.

The problem with searching for meaning through action is that I am still small and mortal and finite, and any significance project is going to require a sustained practice of denial. Why?

To write, I have to believe that there is a purpose to my writing. That it signifies and that you, as a reader, will be impacted in a way that will matter beyond just the moment of reading. This is fairly ludicrous, because you are also small and mortal and finite. A few small, mortal finitudes do not an infinity make. It's a crippling, paralyzing thought. So I ignore it. I blank out the part of my mind that realizes I've been writing for decades and still understand almost nothing and make almost no difference in anyone's life at all. I ignore the part of me that knows that, except by some wild fluke, I will never have much influence on the broader course of human history and that my writing is probably only so much farting into the wind. That even if by some miraculous fluke I grew to be extremely well-read, it still wouldn't amount to much.

In order to give my life meaning, I ignore these facts.

So I understand my old friend. I get why a man who spends his life steeped in false patriotism is compelled to go overseas and commit multiple acts of killing at the behest of his government. He gives a portion of his life to violence so that his life will mean something. He sacrifices what he knows (somewhere deep down) to be true about God, himself, and the human race because he believes that this is the best way for him to matter—to hold off the angst he feels over his own mortal finitude.

The fact that this is understandable does not make it good.

I would love to argue that my own sacrifice and denial are morally better, because A. I am committed to creation, rather than destruction, and B. I am consciously attempting to arrange my writing around the principles of love and anti-violence.

The truth is a bit more complex, though.

The truth is that I write not just for truth, beauty, and love... I write so that you will like me. I write in the hope that someday, lots and lots of people will read my words and watch my movies and they will not just be moved toward better, more moral and loving behavior—they'll also give me the adoration (and money) that some part of my deepest self believes will give my life meaning and make me feel a little less scared of my impending death.

I know already that it won't work, though. Not just from the testimony of every successful artist or writer who came before, but from my own experience as well. I've had my moments. They've been exciting and intoxicating and, ultimately, empty.

Here's a crazy thought: denial is not necessarily bad.

In fact, it's necessary in order to actually effect change in the world. And change, however provisional and incremental, is possible.

The question is not whether you will live in denial of the truth, it is which sort of truth you will deny.

Because he denied the inherent racism of white people, Martin Luther King set America on a better path. Because he refused to believe in the inevitability of British imperialism, Gandhi helped bring an end to endless oppression. Because she denied that anyone can be untouchable, Mother Theresa brought hope to millions.

As close as I keep finding myself to the brink of despair in our current tire-fire of a political predicament, I think that the project of my life has to be to continually deny despair any real hold on me. To refuse to believe that we are stuck forever on a path where the rich and powerful continue to crush the weak and poor for nothing more than fun or profit. To ignore all evidence to the contrary and believe instead that people can change.

That together we can pull our heads out of the sand, open our eyes, and fight for the hope, faith, and love that right now seems so impossible.

*This correlation is not particularly surprising.
Labels: faith Jesus politics