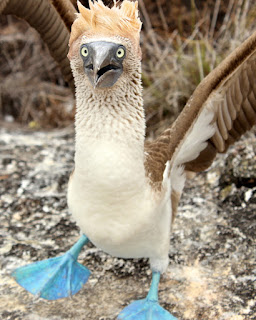 This past week when my fellow grunt-laborer Andrew and I were painting a room booby-foot blue, he said to me, "Josh, all my other friends were sure there was no way Trump was gonna win. You were the only one saying all along that he was gonna be the next president, so... how did you know? Were you just being cynical, or what?"

For a nanosecond, I considered the possibility that I might actually have powers. Then I answered...

"I guess if I'm honest, I was just sort of being cynical. Part of me didn't really believe something that grotesque could happen. But on the other hand, I really did think it would, because I have absolutely ZERO faith in 'the American People.' As individuals they're generally quite lovely. But the shrieking masses...? Monsters, the lot of them."

Andrew thought about this for a moment.

"Still, you were the only one predicting this would happen. So, what do you think'll happen next?"

It's one thing to look at the general temperature of fear, selfishness, greed, violence, and despair in the nation and assume that the sheeple are gonna run screaming, en masse, off the nearest political cliff. It's quite another to predict the specific future of a man characterized by unhinged unpredictability.

A Few Possible Futures of the Yellow-Headed Booby, Emperor Trump:

I know you'd prefer me to say I was only kidding. That I think the American system is strong enough to contain the leaking-box-of-nitroglycerin that is our incoming president, and that the next four years will be nothing more than a succession of painful embarrassments and minor reversals in human rights. I would love for that to be true and I'm going to keep hoping that it is true, but I'm afraid my aforementioned lack of faith in the American people keeps me from adding that option to my list.

For the past almost four decades I've watched the United States be reactive and unloving. I've watched an ostensibly Christian nation choose profit and selfishness over the Kindness of Christ.

The United States of America is AMAZING.

This country has so much capacity. More than any other country in the history of the world, the United States is capable of steering the ship of humanity full-steam into a future of equality, kindness, and love. To a future where there is no Jew, Gentile, Slave, Free, Gay, Straight, Black, or White—nothing but People.

I spent my childhood in a foreign country with far more institutional corruption and cruelty than here, so I know what a gift it is to be a U.S. of American. But time and time again, I've watched this country use its power to garner more as an uninformed populace turns a blind eye, believing lies and waving flags as the weak and powerless get crushed. As the planet grows ever more soiled.

We could stop this.

But every time I think we might, I get on the internet and see that Yellow-Haired Booby staring back. Advocating fear, violence, and cruelty. Trafficking in lies, and being rewarded for it again and again.

This is our America.

This is our future.

* Once again: shame, shame, shame on white, evangelical Christians for their Christ-betraying vote for Trump.

** Then again, everybody knows that über-Rich People are never held accountable in our Criminal Injustice System.
Labels: culture politics