Everything that's wrong with Ridley Scott's film THE MARTIAN in one screenshot.

THE MARTIAN was easily one of the very best movies of 2015. I know, because it appeared on my top ten list last year and if I can't trust my own taste in movies, well, I'm pretty much screwed as a screenwriter.

I loved everything about that movie, right up to the very last scene.

You know the one. The one where astronaut Mark Watney (a.k.a. Matt Frickin' Damon) is lecturing a bunch of NASA hopefuls—being all charming and whatnot as they track his every move with their adoring little eyes.

I'm sure it bothered you as much as it did me to notice that every single one of the science nerds in that room was model-level good looking. You noticed, and realized (as I did) that the reason they were all super-hot was not because "this is Hollywood," and there are hot people everywhere in Hollywood. It was because someone (probably director Ridley Scott) really, really likes the Space-Mission ethos and wanted to make it seem extra hip and cool. They got to the end of their well-nigh-on-perfect film and they thought, "Y'know what... we did a good thing, here... but maybe not good enough. Maybe the preceding two hours and twenty minutes didn't quite sell it. We need a room full of hotties to really bring it home." 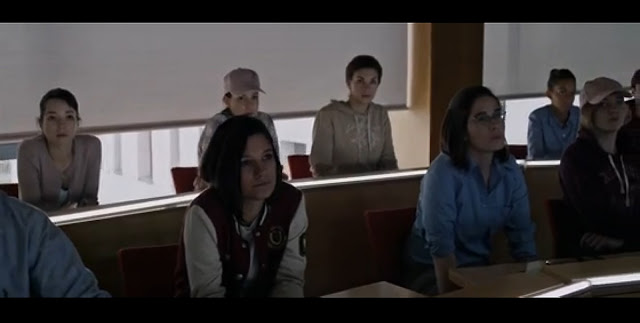 Okay, yeah. I see your objection: that the actors playing astronauts throughout the film were model-good-looking, or at least close to it—so why quibble about a few extras?

Movies are really, really expensive to make. Everybody in Hollywood is super-scared about the poop-ton of money they're spending, and the people holding the purse strings will never sign off on any film that isn't overly-populated with what our culture considers to be extra-hot people. And even though the wildly-attractive actors who "make it" in the business are generally a highly talented bunch, it still sucks—because homogeneity and unfairness and cetera and cetera.

But that's not the case with the extras.

Nobody with money had to sign off on the bilateral facial symmetry of the extras. That was a decision made by creatives, and I bet my deceased dog's left testicle that the decision to find a bunch of models to pretend to be NASA hopefuls was made entirely to manipulate the audience to believe science is cool.

It's not cool because the people who do it look a certain way, though. It's cool in part because when it comes down to real science, all the looks-centric bologna of the rest of our culture becomes irrelevant. In science, it doesn't matter how far you can throw a football or what your chances are of being elected prom royalty. What matters is what's between your ears.

I get it. Movies are lies. They're artfully-constructed falsehoods intended to tell bigger truths. And sometimes to get your movie made you've gotta shake hands with the devil and hire the best hot actor for your lead, while ignoring the more-right-for-the-part actor who might not titillate the masses in quite the same way. But as artists—as lovers and purveyors of the Truth—when we get a chance to tell the truth, we've gotta do it. Anything else is propaganda.

Which leads me to my bigger point.
A point about politics.
AMERICAN politics.

Part of my frustration with this election cycle has been the unprecedented degree of lie-dissemination on the internet, and especially on the social-media-internet.

But while I (as a pinko-commie, left-leaning nutjob) would be the first to claim that most of those lies came hard and fast from the hard Right... there were also plenty of little itty-bitty lies coming from the hard Left. Small blindnesses and big ones. Tiny re-arrangements of the facts, intended to make the folks on the right look all that much more despicable to the rest of our algorithmically-clustercussed echo chambers of "friends."

Little lies that were necessary for a greater good... right?

Those little, noticeable, appreciable lies were exactly the sorts of things that the hard-right Big Liars needed to cloud the issue. To put a brain fog over the many conscientious, thoughtful, intelligent Republican Conservatives out there who were riding a line but—because of the cumulative noise of all those mini-lies—held their noses, ignored the bigger Truths staring them in the face, and voted in the most dangerous-to-survival dude in the history of the office.

It doesn't matter whether you're lying to make NASA look good so they'll get another bajillion dollars to put a woman on Mars while we continue to trash the perfectly habitable planet we're already on, or whether you're doing it to keep a sociopathic molester of women out of the Oval Office. Lies are lies are lies, and the Truth inevitably will out.