Age of Beauty and Despair 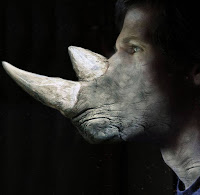 Yesterday I was noticing some random celebrity-woman's pinched little button-nose, and how it looked uncomfortably like Michael Jackson's latter-years-schnozzle. This got me thinking about how rhinoplasty is the most common cosmetic surgery among teenagers, and how painful it is just to think about the phrase "most common cosmetic surgery among teenagers."

I mean, geez, I know it's an insecure time, but that statistic means there are kids (mostly girls) out there who when they say, "I'm not pretty enough," their parents answer, "You know what... you're right. Here's five grand to go get your face cut."

Because why should genes get in the way of happiness?
And what's happiness, other than fitting the Youth-and-Beauty "standard?"
What worth do you have, except as something for other people to look at?

And whoah. Hey. I'm not judging, here. I'm not a woman, so I haven't lived my entire life under the gravitational weight of a mass-marketing industry telling me my worth as a human being is determined entirely by one factor: how I look. I haven't been presented with an impossible, artificial, deceptive "standard" of what beauty is, and then manipulated into spending huge to try to meet it.

Still, the insanity of it boggles my mind. How there's this mass-psychosis that's been agreed to, to the point that half the population is caught in an endless, unwinnable game of you're-not-pretty-or-young-enough. How that half-population does these CRAZY things like getting their faces cut with knives and injected with chemicals and their bodies sliced into bits.

And all the while, part of them knows that it's empty nonsense. That the compliment you get for your artificially-fabricated, made-up looks is not a comment on you—it's a comment on the thousands of dollars you spent becoming a Plasticine Caricature of yourself. They're not loving you... they're loving a corporately-constructed-and-approved hallucination. An ephemeral, grasping lie that's forever slipping away, just out of reach.

So there's anxiety in that.

Real anxiety, with I think like one-third of women in this country (ONE THIRD!) taking some sort of brain-altering medication to try to stave off that demon-scream of you're not good enough, and no one will love you until your (insert body part) is more like (insert latest photoshopped, CGI-pretend-girl).

And it's not just women who suffer.

Men get their own version of Not-Good-Enough from the Money-Machine, yeah, but there's also this collateral damage from the message women hear, because men (myself) begin to adopt (at least on an emotional level) a belief in the Fantasy-Woman presented by the Marketing-Machine.

Sure, men have always been pigs. But this feels different. Insidious. There's something vastly more dishonest about the current manifestation of piggishness... perhaps because it's all and only just a trick, in service of a consumer-based, consumptive society that desperately needs every single person to keep buying more and more stuff they don't need. To keep us all as discontent as possible.

All of this leaves me feeling dirty, drained, and more hopeless than I wanna be for the world my son's gonna inherit. It's accelerating, see. It's not just the planet our excessive consumerism is flooding with toxins... it's the human spirit.

Normally, I just sorta curl up in a damp, gray ball about this stuff.

Why blather on about it, if blathering won't do a lick of good—if the only folks who'll listen are the pre-converted, and even the most hippie-ish, self-actualized women-folk are still (if they're honest) gonna end up bowing in all sorts of small and big ways to the pressure?

Here's the thing, though: some women don't.

There are women of immense courage who, in small and big ways, stand up to The Machine. These stories give me hope.

These, and stories of that elusive antidote to the discontentment-lie: loving community.

Last night, for instance, I re-watched one of my absolute favoritest movies of all time, AS IT IS IN HEAVEN, a beautiful, Oscar-nominated story that presents a world where broken people come together in all their screwed-upness... and love each other ANYWAY.

We can do this. We can patiently, carefully love each other better. We can slow down and be honest. We can listen, and we can be heard.
Labels: consumerism culture gender health