First off you've gotta know that I'm a huge fan of J.J. Abrams' work. If you were to ask me what sort of film-making career I'd like to have, I'd be almost too embarrassed to admit how much I admire him and would like to go back in time and steal his mojo.

The dude started in the movie business when he was sixteen, and his early drama REGARDING HENRY was one of the only films that has ever made me cry. His FOREVER YOUNG was a tearjerker, too (eat a cow pat, haters), and of course he also wrote MISSION IMPOSSIBLE: III and SUPER 8, and created ALIAS and LOST and FRINGE and cetera, and cetera. The man's a story-making machine, and I have enjoyed absolutely every filmed entertainment I've seen that he's had a hand in—including this month's STAR WARS movie.

So it's with zero percent pleasure that I tell you that in my opinion (massive critical consensus be danged) the new STAR WARS movie is not a great movie, and will not be remembered as such down through the ages.


Before I tell you why that is, and before you have a chance to hang me up by my toenails, let me ask those of you who've seen it already and loved it a question: At that key climactic moment when a certain beloved character got a hot-sword belly-button poke, did you feel anything?

Not did you feel anything, like, did you feel hungry or confused or whatever, but did you feel any of the emotion you were supposed to feel in that moment (as demonstrated by the subsequent screaming and shooting of the other characters present)?

Did you feel sorrow over Han Solo's death?

It is my contention that you did not. Not on a visceral, emotional level. Not at the level of pure, amygdallic engagement. Perhaps you felt a sort of vague, cerebral sadness that he would definitely not be a part of future STAR WARS films. But it was nothing like what you felt when Obi-Wan Kenobi got chopped and went phantasmic.

This is not the reason why this new STAR WARS film won't be remembered as great, but it is symptomatic of the reason, and I wanted to mention it before I got to shooting down the main criticism I've been hearing on the Facebooks and from critics regarding the movie: that it fails in some ways to deliver because in some ways it merely re-hashes the things that worked in the other (good) STAR WARS movies.

The people who say this are I think grasping at rational straws to explain their emotional problem with the story—to explain why, despite the fact that it was entertaining and funny and exciting and most definitely good, they didn't somehow feel it the way they wanted to. 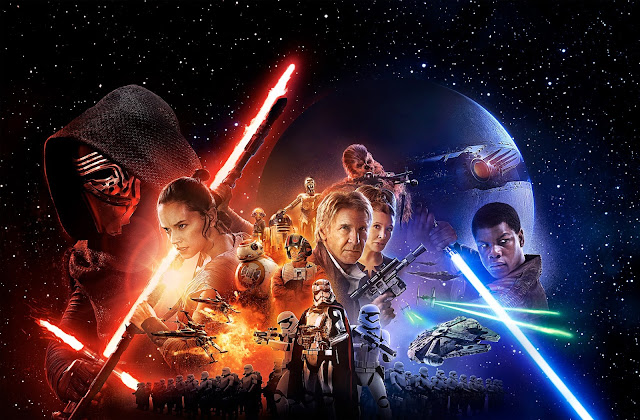 Now to be fair, expectations/hopes were so incredibly high for this film that it would have taken a story-miracle for satisfaction to occur. But critical and audience consensus has been extremely positive, and I personally think that the failure of the previous three movies (which shall here remain nameless) to not be incredibly stupid-dumb actually set EPISODE VII up for critical success. As long as it didn't super-suck, audiences and nerd-critics were going to breath huge, happy sighs of relief.

The movie didn't suck. It was good. But it wasn't great. Here's (sorta) why that is:

First, the Han Solo thing. The reason why you didn't feel anything when he died was that although he was a previously-beloved character, in this movie he did not play a central role in the emotional journey of either of the film's two main protagonists.

The original story turned on Obi-Wan Kenobi's character. Obi-Wan was a father-figure to Luke, coming to him at a time of immense emotional turmoil and loss—providing him with wisdom and, more importantly, kindness.

So when he died(ish) Luke really, really felt it... and we felt it with him.

But Han is a peripheral character in this new movie, and in no way connected to our heroes' emotional journeys. So although the film-makers attempted to tell us we needed to care by having them scream just as Luke Skywalker once did... it didn't actually work. With Luke, we had felt the loss of his Aunt and Uncle. With Luke, we had felt hope when Obi-Wan issued him into a new world. So with Luke, we felt it when Obi-Wan died. Here, no such bananas.

Now, I don't blame the filmmakers for this.

Harrison Ford is about my dad's age, and I can tell you for a fact that my dad (although pretty active and fit) could never be an action star. STAR WARS is an action movie, and Ford proved this when he fractured his leg on-set and they had to delay filming for a couple weeks. He's an old dude but fans wanted him in the movie, so they wrote him a less-active part and kept him out of the main, action-packed story line. Fine. Good. He was as fun to watch as ever, and I'm glad they put him in.

But then they tried to put him at the center of the climax of the film's emotional journey. And for the aforementioned reason, on an emotional level it just didn't work. So the movie had no emotional climax, and we were all left feeling just a tiny bit, um... unsatisfied. 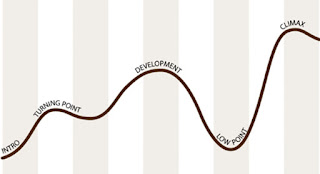 There are no easy fixes to this particular structural problem in the film. In fact, you'd probably have to rewrite almost the entire thing to make that moment work. And far be it from me to suggest that I might begin to know how a brain-trust of such brilliant writers as were on this movie could go about doing it.

But I can't deny that the problem is there. That although the individual moments of the film are almost universally engaging (although the Han-Leia interactions are a bit weak, dialog-wise), the film as a whole doesn't resonate the way it would need to in order to fully enter the pantheon of film greats.  I feel this to be true, right down in my emotional gut-balls. Where I keep the Force.

So do you, I think, if you're being honest.

When critics whine about the rehashed elements, it is this, I think, that they're trying to express (because re-hashed elements are not an actual story problem, and when everything else is working are cheered as tributes).

Have I really answered the question of why the film doesn't quite work?

While emotional resonance is something all creators and writers struggle to attain, it is ultimately an untameable sort of lightning that can only be bottled at oblique angles, by near-divine chance. You can't force it to occur, and there is no filmmaker/writer/storyteller so perfect in her instincts as to be able to coax it into being every single time.

Still, J.J. Abrams and the writers and their team have indeed made a good movie.

They have redeemed the franchise from super-suckiness, and we can all hold our breaths and wait hopefully for another two years for (the beautifully-brilliant storyteller) Rian Johnson and his team to ride the white lightning, out into the stars.
Labels: review