wrestling God in the darkness

I just got a junk email from some guy who's calling himself the Prophet Nathan Paul Agostini, the headline of which reads, "You Will Die This Year!"

Part of me wants that to be true.

I mean, it must be... right? Why else would there be such a huge market for apocalyptic entertainment? Unless I guess maybe it's cathartic. Like, we look around at the fact that the guys driving the bus are obviously loony and, I dunno, the growing police state... and yet we somehow still can't bring ourselves to really talk about it.

So it's nice to have someone say, "Yep... we're doomed." There's a kind of hope in it, like that maybe the fact that we're hearing about it ahead of time and acknowledging it means we're special—that we're gonna be part of the lucky few who survive all the raining-blood-fire-hellishness and then after a perilous journey across a sun-scorched desert we'll make it to the promised land. There's a mythic quality to this narrative that has basic, human appeal.

Every time I read David Foster Wallace, he pretty much steps in and possesses my writing for the next several days. Can you tell? That loose, conversational style. The wry side-swipes at Culture-as-a-Whole. 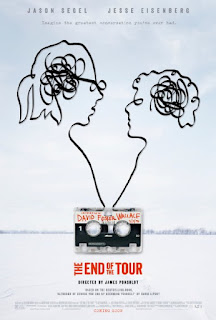 I've been reading the script for a biopic(ish) about David Foster Wallace called THE END OF THE TOUR, which is written by Donald Margulies and is awesome. So I've actually been reading a screenwriter's retelling of another writer [David Lipsky] who wrote a book recalling things that David Foster Wallace once said. Even at three levels of remove, Wallace's words have hooks. Brain-hooks, I mean.

THE END OF THE TOUR is extra-impactful because it's likewise about the sort of stuff that Wallace talked a lot about in his writing, like depression and loneliness and also using art and writing to grasp after meaning and whatnot. And given the fact that the screenplay (and subsequent movie) begins with the advent of Wallace's death-by-suicide, the pain on the page is all the more poignant.

So he's talking about depression and he's talking about fame, about chasing hard after some sort of success in the very-American way of believing that attainment is somehow going to bring significance. That things will then be all okay.

And he says (referring to a section on depression in his book, Infinite Jest):

"I was just thinking... There's a thing in the book: when people jump out of a burning skyscraper, it's not that they're not afraid of falling anymore, it's that the alternative is so awful. And then you're invited to consider what could be so awful, that leaping to your death seems like an escape from it. I don't know if you've had any experience with this. It's worse than any kind of physical injury, it may be what in the old days was called a spiritual crisis."

One of the things I love about David Foster Wallace is the way he so often hits nails squarely on their heads. And even though he did not ultimately find a way to live through the morass, he's so good at cutting right down to the bone and exposing the deeper magic that he's able to reference something like a spiritual crisis without ever losing credibility with the more intellectually-bent.

Now that we're talking about writerly-insecurities (we are), I should mention that one of my biggest is that I won't quite meet that DFW bar when it comes to writing about transcendence... which I believe in quite firmly.

There's this materiality and empiricality to current modes of thought that bothers me, if only because I don't think the track record of scientific achievement has actually been all that great when it comes to promoting and growing human well-being and health. In so many ways, yes—I can't tell you the number of times I might've died as a young kid without the interventions of modernity—but in other ways the whole Industrial-Revolution-Scientific-Explosion has been a real kick in the nuts.

Setting aside my basic Luddite discomfort with screens that flash and allure, there is the indisputable fact that it is our many accomplishments that have facilitated our current uber-accelerated rush toward the destruction of our species (not to mention all the peripheral species-cides we keep blithely enacting on the way). The loonies are at the wheel, fronting a seemingly endless cargo train of nuclear freakin' annihilation. Scapegoats are being slaughtered by the millions, but it's just not working. As a species, we have always worked pretty hard to shorten the average human lifespan. But modernity's allowed us to accelerate the process to mechanical rates.

And looking at that, I just end up losing faith in the human mind as a path to enlightenment.

Which I guess brings us back to the whole depression thing, where DFW knows ahead of time that his writing won't save him but he goes ahead with it because he can't seem to grip onto anything else. Religion, so often crippled by the stupidities foisted on it by baser human nature, ends up being too intellectually porous to hold him.

In the script, Wallace tells this anecdote about how he was once working as a glorified Towel Boy at some fancy hotel, when some dude he'd shared a podium with a few years before at this prestigious writer's award ceremony came in, and he (DFW) literally dove under a table to avoid detection. I know exactly how he feels, as I once had to wait on a table of my ex-college-chums at the Olive Garden. We'd all been out of college for about six years, and I knew for sure that one of them had gone on to start his own film production company. His wife was someone I'd once had a mad crush on. And I was bringing them bread sticks.

When you are a waiter, diving under the table is frowned upon.

My point is that knowing really isn't half the battle, no matter what GI Joe's Public Service Announcements used to claim.

DFW could identify the rot all he wanted. And I could know with every bit of my brain-stuffs that a great many super-gifted artists and writers before me have waited tables and worked as Towel Boys and been humiliated in a thousand different ways—often without ever coming close to the humility that these experiences has to offer. That they went through it and came out the other side and found recognition and still weren't all that happy about being alive.

But a part of me still believes that "winning" at the art game will make everything be all right. Part of me will always want an easier, more dopamine-ready solution to the Problem of Existence than the counter-intuitive ones demanded by what I firmly believe is more appropriately identified as a Spiritual Crisis.

The whole world is in a spiritual crisis, a crisis exacerbated by the noisiness of the internet and the fact that we've managed to accelerate the Dialectic of Human Destruction to the point where these days, all I ever want to write is apocalyptic doomsdays.

Right now, though, I'm writing a script called MARLENE THE DIVINE, which is about a skinny white guy named Kenneth who's kidnapped by a beautifully-rotund black woman named Marlene and dragged on a road trip across America. The hook I'm working with is that Marlene happens to be a mildly-violent, carjacking God Incarnate... which sets the stage not only for her to brow-beat Kenneth into redemption, but also allows me [through my mouthpiece, Kenneth] to really let God have it for the sometimes-seeming indifference with which she allows us (which is to say, me) to suffer such a bleak, tragic existence.*

I am not yet sure how all this is going to play out. Art is, after all, about wrestling with God.

And sure, yeah, lambasting God might be a risky thing to do. But who cares... I'm apparently gonna die this year.
Labels: depression faith writing