My script COITUS wins Silver for Sci-Fi in the Page!

Screenplay contests, like all contests, are largely crapshoots... but that doesn't make it any less cool to place in this year's Page International Screenwriting Awards. 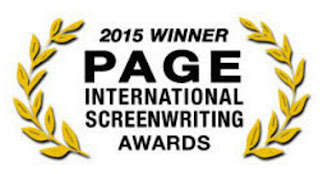 The Page is one of the big ones, and placing second in my category puts me in the top tinieth percentile, which is pretty sweet in a world where it is really, REALLY hard to get anyone to read anything you write, ever... let alone the sort of anyone who can flick a pen and make a movie happen.

This is because there are something like fifty thousand new scripts registered with the writer's guild every year. Most of these scripts are written by rank amateurs who are only trying to write screenplays because they think it's an easy scribble to a million bucks. They are wrong, but that doesn't stop them from building a slush pile so high, it's now easier to become a professional football player than a professional screenwriter. With only around thirteen hundred writers reporting income with the screenwriting guild each year (and most of those making only a pittance), the chances of breaking in are slim-to-impossible. After all, the major studios make less than a couple hundred films a year, and buy less than a hundred written-on-spec scripts. And most of those purchases will come from established writers, who have long-standing relationships with the people with the golden pens, and can at least be sure to get their stuff read.

So, why enter contests at all?

Entry fees range from forty-five to a hundred dollars. So let's say I have two screenplays and I want to enter the bigger contests: Nicholl, Austin, Page, Big Break, Sundance Lab, Slamdance, Scriptapalooza, and Script Pipeline, to name some of the better-known. This means that in a given year (assuming I meet their early deadlines), I could spend nearly seven hundred dollars on a one-in-millions chance that I'll hit a succession of exactly the right readers on exactly the right days, to the point where I'll win the contest and get ten-to-fifteen reads from industry professionals on just the right days, with (I hope) just the sort of script that they know a certain director is looking for and... BAM! I'll be in there.

Maybe it's because with so few doors into the business, I have to knock on all of them.

Maybe it's because I love movies and believe in my writing and my stories, and want to be a part of that great big movie-making conversation that seems to be tugging at the puppet strings of the world.

Maybe it's because I can't see myself doing anything else with quite as much joy.

So I've been doing it. For the past three years, I've been spending money I don't quite have on (a diminishing number of) contests I don't quite believe I'll win... with the following results:

On the wall over my computer, I've tacked a little piece of paper on which I've written the words, "For M_ _ _ _, I will win," because when it comes right down to it, none of this really matters—not the stress of waiting for contest results, or the gut-punch of losing.

He will also see a large (and growing) group of family and friends who supported his father in this crazy, quixotic task. He will see a community that banded together to make his dad's first feature film, the mini-micro-budget dark comedy, PINK.

He will see a vision of the world where no matter how high the odds are stacked against you, you gotta keep trying—chasing after the thing you love. Because where there is love, there is hope.
Labels: contests