It's been five years now since I started reading, studying, and practicing screenwriting. In that time, I've written twenty-five-ish short films and am closing in on my tenth feature-length screenplay. I've had four short films and one feature film produced, and I've done writing on several other short films that have been produced, or are in varying stages of production.

Nothing all that life-changing has come of it.

I'm still sitting here in this ivy-wrapped shed in the woods, tapping away at my keyboard. I'm still entering screenplay contests and not winning them. My shorts have played a number of festivals, but none of the huge festivals, and none of this has led to paid screenwriting work of any kind.

This is to be expected.

It is very, very difficult to become a good enough screenwriter that someone will want to pay you for your words. There is so much competition and only now, after all this struggle, do I feel as though I'm beginning to understand what it takes to make a good story—let alone a great one.

So why keep trying?

Why sacrifice so much on the altar of something that sometimes feels less like a passion and more like an overloaded rucksack?

I think the best answer I can give is to look back at where I first began to express myself creatively: through painting and drawing. Back in those days I would work weeks on a picture and then, if I was lucky... a handful of people would see it. One or two might be touched. The right one (with money) might buy it, and allow me to keep painting more.

I wanted to reach out and make more than just a few, small connections.

And there was film.

Film, that at its best could touch so many people—could impact the way they'd think about the world, without them even knowing it.

So today, on the cusp of most-likely hearing from yet another screenwriting contest that one of my best scripts has not advanced—that I will not be handed a golden pen and told I'm literarily important—I want to share with you this lovely little video-essay from the Nerd Writer about the brilliant, dystopic film, CHILDREN OF MEN. 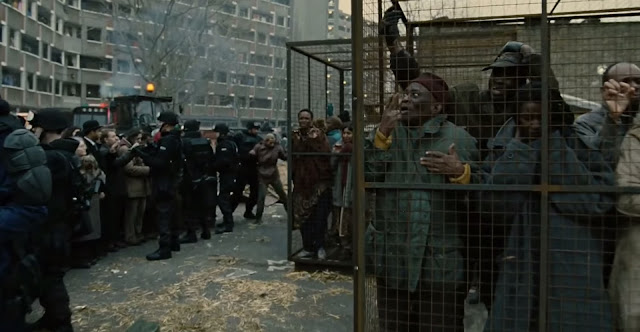 In it, the Nerd Writer argues that "The grim combination of nationalistic, xenophobic politics and late-capitalist consumerism isn't something that we have to imagine... in two thousand and six when this film was made—only five years after nine-eleven and at the height of the war on terror—this was and in many ways still is the state of things."

He goes on to point out that "for each of us individually, it's hard to see anything but the foreground—the lead story," and shows how CHILDREN OF MEN director Alfonso Cuarón has subtly pushed us to look past that foreground, into the background we'd much rather ignore.

When I first watched this movie, I didn't think about any of the themes. I just enjoyed the story. But I still absorbed Cuarón's message. It still became a part of how I think about the world.

That is the power of film, and that is why I'm not going to let a few (hundred) rejections stop me.