I'd like to take a moment to take a stance on something that ought to be debated in this country, but isn't: the freakin' Pledge of freakin' Allegiance.

For those who haven't been subjected to it, the Pledge of Allegiance goes like this:
Did you know they make schoolkids say that every morning?

Which, okay, fine—it's just a few words, and boo-rah for things like liberty, justice, and solidarity—but isn't it a little weird that they make kids start their school day by making some sort of solidarity pledge with their hands on their hearts, whilst gazing lovingly at a flag, so help them God?

Also in my opinion it's un-Christian, this whole bit about pledging loyalty to the principalities and powers of this dark world (which, yes, includes nation-states and things of that ilk). So I've always told my son he doesn't have to say it, and have attempted to teach him the alternate Pledge of Allegiance that I once-upon-a-time in middle school gleaned from an issue of Reader's Digest, which goes like this:

My son has difficulty with memorization, though, and apparently some girl got in big trouble for not saying the Pledge in class. So this morning he tells me he just stands there with his hand on his heart and pretends to mouth the words.

Which I gotta tell ya, it annoys me.

He shouldn't have to pretend. It's not like I'm making him not say it—I've just explained my objections and told him that he doesn't have to, and that if his teacher tries to make him then he's to tell her that it's against his family's religious beliefs, and that she should call me if she's got any objections. He tells me he agrees with me... so why should he have to hide that light under a bushel?

In writing this, I got curious about the history of the Pledge of Allegiance. So I looked it up online and I found that the Jehovah's Witnesses, of all people, have objected to it all the way back to before 1940, at which time the United States' Supreme Court ordered that their kids could be compelled to say the pledge.

This resulted in a lot of mob violence and intimidation against Jehovah's Witnesses, probably even after the Supreme Court reversed that decision three years later... because, sheeple.

Allegations have been made that the Pledge was instituted in a propagandistic effort on behalf of corporations to equate free-market-capitalism with religious virtue (an effort in which they seem to have had resounding success in the minds of a Certain Portion of the population), but my objection is less against the general brainwashing effect of Public School Education and more against the fact that I think they're reprehensible for trying to turn my seven-year-old into a patriot.

Patriotism, I still contend, is just a few millimeters from Nationalistic Numbskullery, which is just a hop, skip, and a jump from Fascism.

Especially if you're trying to turn children into War-Machine robots. 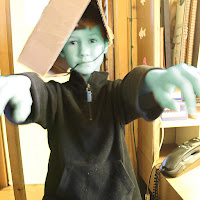 Well I've got news for you, 'Murica. My son ain't no robot. And as much as it pains me that he has to live in a world populated largely with robots who have no qualms about roboticizing (lobotomizing?) their own children, this is one you're not going to win.

This morning, my son made a black and white egg out of legos, then went looking for bones to put inside it so he could hatch out a Minecraft skeleton. And he really believes it's going to work.

Brainwash that, ya hegemonic ding-dongs.