a pool full of Jesus

The other day I was hiding in the shade at the local public swimming pool and watching some kids (but not in a creepy way I swear because I was getting paid to do it).

I'd been there long enough to sketch one of the poolside chairs, when a trio of we'll call them "Church Ladies" showed up, changed into their shorts-and-onesie combos, grabbed a foam noodle each, and gallumphed their way into the water.

At the time, the kids were playing this complicated game called "Categories" that required them all to swim from side to side across the deep end every couple of minutes. This annoyed the Church Ladies (who wanted the deep end to themselves), so they spent the next hour and a half grumping just over their breaths and plotting to maybe kick the kids out of pool because obviously they weren't over eighteen and the pool rules clearly stated that they needed to have someone over eighteen and on and on and on—which I guess I expected, because the week before when just two of them'd come they had whined a bit as well, and had insisted on enforcing some arcane rule out of the long list of commandments posted by the gate. 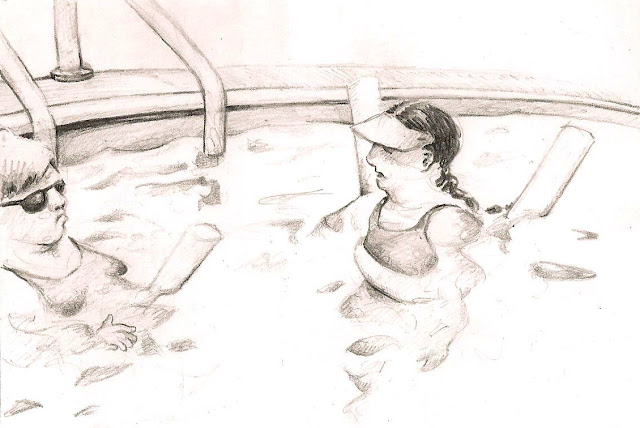 I ignored them because who cares, and because it was more fun to just sit there and sneakily draw them, not as they thought themselves to be (righteous crusaders suffering a series of grave injustices at the hands of miniature terrorists), but as they appeared to all else present (self-righteous, Holy War gallumphers).

I sketched on, and they went on getting more indignant amongst themselves, pausing in their conversation about how they were going to pray for this or that offensive person to make (barbed) requests that the kids maybe stop making quite so much noise, or splashing, or generally being children in any way.

For my part, I was praying they'd cross into overt rudeness so I could stand up and prophesy over them with, like, a pool noodle to the face and a few choice words about pretending to be Jesus-People whilst all the time wishing they had the power to rid themselves of the little mutants who (I'm told) Jesus once claimed were the inheritors of the Kingdom of Heaven.

They chose, however, to be passive-aggressively indignant.

To for example tell a story about a friend who had to care for his rowdy grandkids (little rotters like these, she implied) for a week, and had masterfully dealt with the problem by sitting them down in front of a TV and making them watch Bible lessons the whole time (in accordance with prophesy... as God intended).

If there'd been a nice, soft wall nearby, I would have punched it.

Instead, I let the kids do what kids do best—which was to be more gracious than the adults, and to turn the other cheek, and to let mercy triumph over justice...

*Yes, I'm aware that there's more going on than just "kids are the salt of the earth." There's also "grownups are big and powerful and experience has taught us that defiance leads to pain." In this case, however, I felt the children handled themselves with a good deal of grace. As I've said before, purity isn't really possible... but perhaps holiness is.

NOTE: I WON'T NOT BE UNHAPPY IF YOU DON'T SHARE THIS (QUADRUPLE NEGATIVE - BAM!!!)
Labels: Jesus justice