On a scale of "One" to "Manipulative Psychopath," I'd say I score a little higher than average. Take, for example, this photograph I made of a couple kids playing on opposite ends of a string—a moment I captured on November 27th of 2005, in Huaraz, Peru. 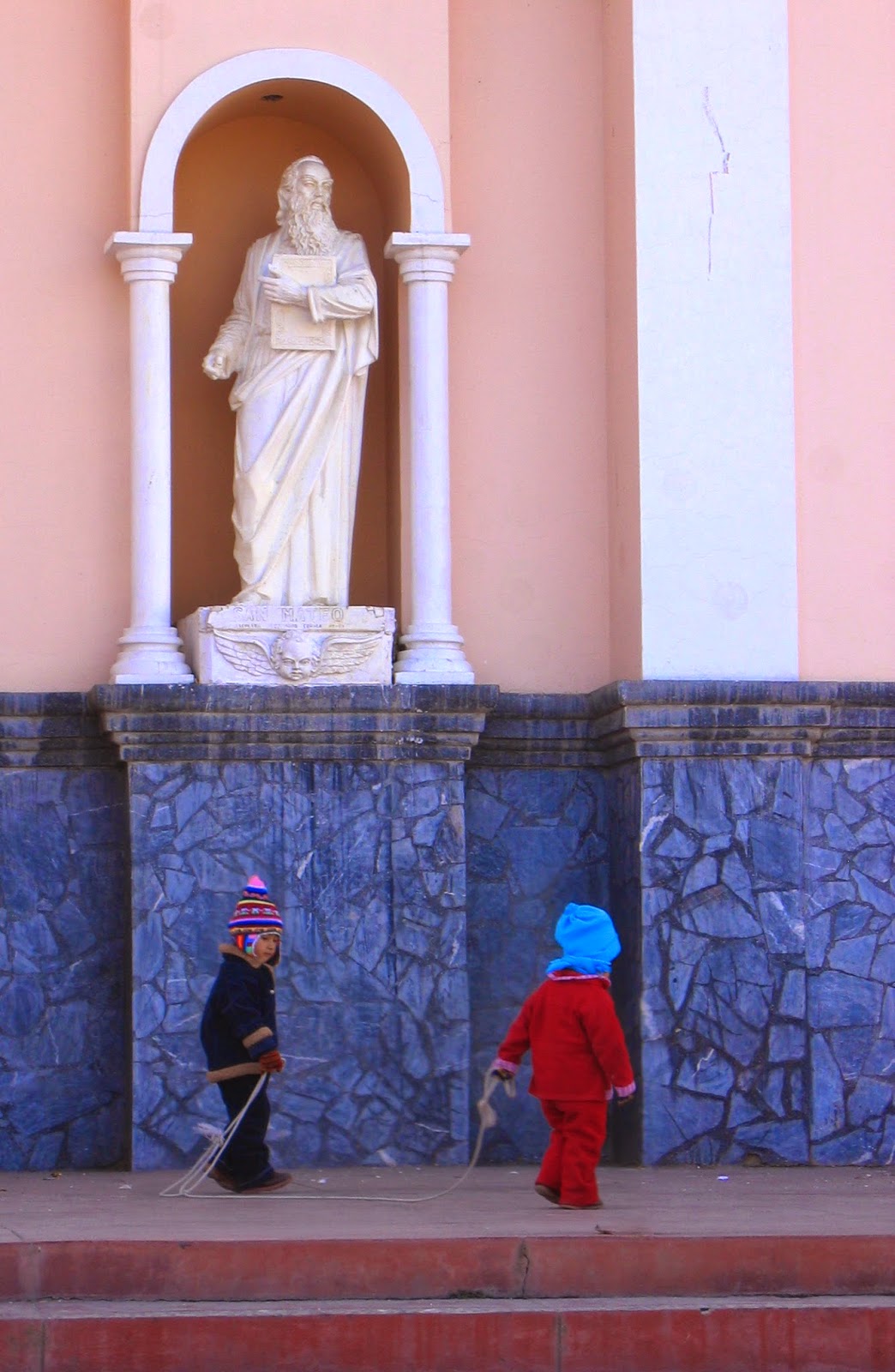 Pretty cool picture, right? A moment of childhood innocence, presided over by a statue of Saint Matthew—which might be said to represent age, history, art, or even the Catholic Church.

There's a beauty to the picture, and a power to this fraction-of-a-moment.

The only problem is that this moment didn't actually ever exist.

No, this moment didn't exist because I actually created it by splicing two pictures together in photoshop. I'd taken several images of the two children playing, but most of them were out of focus, so I'd kept just two. One of them had both of the children fully in frame, but with the statue's head cut off. The other had the statue fully in frame, but with one of the children cut out.

I never really liked either picture, so a couple days ago I removed the girl-in-red from the picture with the intact statue, then cut in the picture of the two kids from the decapitated-saint picture. I mucked about with the exposure to make them match, tweaked the background a little, and removed a visually-distracting wire that was hanging from the hole over the statue. I then merged the two layers, doctored the levels, and cropped the photograph to a more aesthetically-pleasing composition.

I did a pretty good job, I think—you'd have to really know what you were looking at to be able to tell the difference—but that doesn't change the fact that this is not actually a photograph of a moment. It's a photograph of two different moments, mashed together with technology.

I started this post with a lie about the image, but it was a teeny-tiny little lie, after all, and the sort of lie you're used to. You're aware you've probably never seen an image of a celebrity that hasn't been significantly re-touched in some way. You know that it's not just your film-professional Facebook friends who are carefully curating, editing, and re-touching the photographic story-of-their-lives to make it seem like they've got things all together.

You're aware, too, of the anxiety-inducing effect of all this, and how it's all a big, fat, stinking corporate charade we're agreeing to maintain, just for the Emperor's-New-Clothes solidarity of it.

The problem, as I see it, is that some of us do it more than others. Some are better at it.

And as a writer and a visual artist, I do believe I am at a bit of an unfair advantage. I'm not a full-on scheming, lying psychopath, but I do spend quite a bit of time constructing a dishonest narrative-of-my-life for public consumption.

So I'd like to take a moment to deconstruct a few things.

First, the photograph(s) of the kids at the cathedral... of that perfect little moment.

I actually had a touch of altitude sickness, that day. What's more, although I was on vacation and the pictures I chose to share were all well-composed and bright and happy, I wasn't. My most important human relationship wasn't going particularly well—was perhaps even then lethally infected with the pathogens that would kill it. I was feeling frustrated with my inability to get the shot I wanted, guilty over the mistakes I'd made in my relationship, and afraid of the future.

Most of that was buried deep, though. On the surface, I was enjoying a happy-time jaunt through the land of my childhood, the most beautiful country in the world. I was taking perfectly-composed shots that would demonstrate both the superiority of my photographic skills, and the (obvious) fact that my life was better and more interesting than yours.

Fair enough. We've all done it.
But let's get a bit more current.

A few days ago, I posted a link on Facebook to a website listing 50 Film Festivals Worth the Entry Fee in 2015, with a tag-line about how I get to go to two of these for free. One for a short film I wrote (TWO FOR TEA - Cucalorus, Official Selection), and another for a feature-length screenplay I wrote (GINSENG - Nashville, Screenwriting Competition Finalist).

I do know how great I have it, though. And I know the importance of being grateful for what I do have, and of focusing on my successes—not my failures.

But on the off chance that you are a person who, like me, tends to look at the publicly-displayed personae of others as a metric against which to measure yourself, I wanted to add my voice to all the other voices out there trying to remind you that nobody presents the entire picture.

We're all fighting a hard battle, and we're all both winners and losers, at the same time. So don't be afraid to share your failures, too.

We're in this together.
Labels: art community writing