black mirror and you 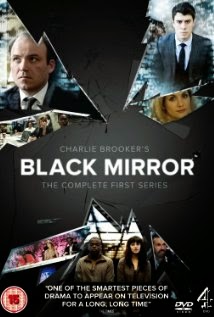 This isn't so much a review as a recommendation that you check out the British series BLACK MIRROR, a television anthology that explores some of the more troubling aspects of our tech-infused, brave new world.

For example, the recent episode "White Christmas" stars Jon Hamm (of MAD MEN fame), and takes us into a world where everybody's got computers directly installed into their eye-and-brain—forcing us to think about what we sacrifice when we place digital intermediaries between ourselves and other people.

The show is often dark, disturbed, and uncomfortable—but also an eerily prescient bit of artistic-prophesy. So if you're up for a little world-perturbation... Check it out.
Labels: film review