I don't think Americans are obsessed with sex. 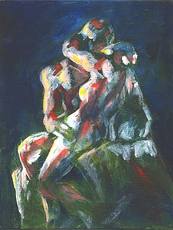 I think Americans are obsessed with thinking about sex. With sex as an idea. With women as ideas and objects to be looked at and thought about and used to sell products.

And I think there would be absolutely nothing wrong with this sex-thought-obsession if it wasn't bleeding over into the real world and ruining real-people lives.

[That's a joke, by the way—the idea that there could ever be a world where thoughts didn't bleed into reality.]

Thought-sex is a story we tell ourselves based on both personal sexual experience, and on the stories that others have told us about what sex is or should be. Real sex is related to thought-sex, because things like sexual attraction and arousal live in the mind in a sort of electrical dance with our Whole Selves—the accumulation of experience and ideation that shapes our Way-of-Being, and then projects out from that  Way-of-Being into the day-to-day actions that create our present and future realities.

The problem is that there are bad stories. Fake stories. Stories with lies in them.
Stories that for example use women as objects—generally in order to sell things.
Stories that get tangled up in our minds and then recreate our future realities.

Real Sex is messy. It's noisy. It's silly. It smells, and it has consequences.

Not the oh-my-gosh-the-world-is-burning! sort of consequences you'll get sold in church or health class, but the sort of day-to-day consequences that propel your life in a direction you did not intend to go, and into a story that is less than your best hopes and dreams. Nobody actually wants to have an abortion, or to acquire an STD or an unintended pregnancy. Nobody wants to wake up one day and find themselves in bed with someone who (it turns out) saw them as nothing more than a source of friction or emotional fantasy.


It's just that weighed against the story-power of a real-life, rush-of-blood-to-the-head genuine sexual experience, all those consequences are actually kind of boring. I think Americans are obsessed with thinking about sex because real-life is mostly boring. And we don't want boring, we want brain-drug happy-juice.

This is normal and easily understandable, but it is not okay.

It is not okay because it allows the tellers of fake sex stories to hold sway, and gives those fake stories purchase in our minds. Even if we don't imbibe a lot of explicit fake sex stories ourselves, we live in a culture that is deeply influenced by those stories on all levels. All of them. The Superbowl is on today, and I guarantee there'll be multiple examples of this in the commercials, alone.

Fake sex stories are everywhere.
They are the water through which we swim.

I think we are suffering the real-life consequences of this in a massive uptick in fake-sex-story-use among men, and a massive down-tick (so to speak) in their ability to actually participate in Real Sex. I'm not making this up. Statistics show a surge in men who are more interested in fantasy-relationships than in real ones, and in men (even young ones) who can't actually follow through with Real Sex when they get the chance.

And everywhere I look, I see women who are accommodating themselves in contortionist ways to the fake stories being told by sellers-of-bad-fake-sex, in the hope that somewhere at the very far end of it they might just find something real.

I think that women are doing this because they don't actually have much of a choice.

The internets have made it extremely easy for the tellers of fake stories to disseminate (so to speak) those stories wildly, and sometimes it seems as if the only people who are standing against that are folks who respond with oogedy-boogedy stories that are full of fear and lies, and the pretension that sex can actually be caged up and controlled, like some circus animal.

Real Sex is you. All of you. The good, the bad, and the ugly. Real Sex is your deepest fears all out on display. It is vulnerability and hope. It is joining. It is giving. It is self-sacrificing for some greater good that I'm afraid (in a real, non-rhetorical way) we're all just going to have to take on faith.

Real Sex is risky, and there is absolutely no way to remove that risk. Neither by following a bunch of rules, nor by chucking those rules and pretending that they're in no way linked to any kind of real-world consequences.

The very painful truth is that if we want to have Real Sex, we're going to have take the biggest risk of all and reject the crack-like appeal of the fake-sex stories. We're going to have to gamble it all on a faith-based belief that our future selves will be happier with one real, stinky, flawed person than with an unending succession of fake-sex-thought-perfection.

I think we know this.

I think this is why celebrities who like to yammer on about the unnaturalness of monogamy still keep getting married. I think this is the desperate hope we all share—a hope that we perpetually sabotage in our quest for an easier alternative.

But I'm sick of all these fake sex-stories that live only in my brain.