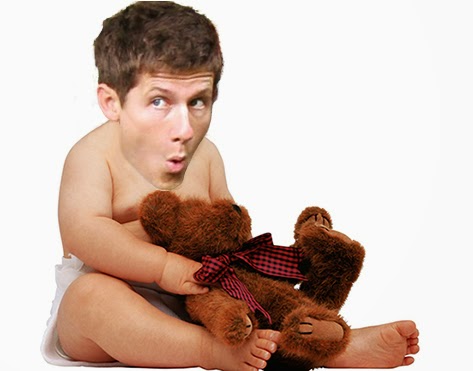 Admit it—you thought I was younger than I actually was the first time you saw me. You thought I was a teenager, perhaps, when I was in my late twenties. Heck, maybe you still think I look like a teenager—certainly not old enough that I could by now have fathered a teenager of my own. Or several. With the same woman. After graduating high school.

One of the downsides of looking much younger than I am is hearing endless iterations of the refrain, "You'll be grateful for this when you're fifty," as though aging and looking older were something to be ashamed of, or something I'll most definitely want to hide. Ludicrous.

Do you know what is a shame, though?

It's that when I started crawling through puberty while my friends were leaping, I never found a way to actually own my reality by just admitting it. Instead I turtled, and never once admitted out loud that it sucked to be excluded from my friend's social reality by something as ridiculous as biology.

Fact: there are far worse things in the world than slow puberty, or being asked at the age of twenty if you qualify for the twelve-and-under deal.

And what of the benefits? Even beyond discounted tickets and a variety of interesting criminal possibilities, think about the what I could have done in the field of acting for film and television. Labor laws make it difficult and extra-expensive to work with children, so they're always hunting for over-eighteen babyfaces who can play teens. If I hadn't been so bound up by loneliness-fermented-fear back in my college years, I might have translated my interest in acting into a good ten years of Hollywood awesomeness.

I'd have been HUGE.

Think of the parties! The money! The women! The cocaine!

Okay, so... maybe that wouldn't have been the best thing for me.

All I'm saying is, life is too chokingly short to fritter it away being worried about who you are. You can't change it, so just accept it and do your best to find joy in all circumstances. No matter how rough it is for you right now, I guarantee there's someone else out there who would trade places with you in a heartbeat—maybe even somebody you'd never expect. Maybe think about finding those people and doing what you can to make their lives a little easier.

Because yourself is awesome.

And the world needs you.