I know I've been a bit obsessed with dropping David Foster Wallace-bombs, but that's because the library's been dropping more Wallace-books on its shelves. I swear, they've got some sort of master-brain system that zeroes in on my preferences and just frickin' indulges the heck out of my bibliophilic self.

I love you, library.
I'd make out with you if I could.
Except licking books gives me tongue-papercuts.

I'm in a mood, I guess, because I just finished a solid re-write of my latest film-script (YEESSS!) and then listened to this fabulous Italian-written song-with-fake-American-slang lyrics from the '70s called Prisencolinensinainciusol, which was apparently written as a comment on non-communication:

Anyway, I thought today I'd say a little something about communication, because the David Foster Wallace piece I've been reading this past week is about the epic battle apparently raging between the makers of dictionaries, as described in the essay Authority and American Usage—which is ostensibly a review of Mr. Bryan A. Garner's A Dictionary of Modern American Usage, but ends up rising waaay above that by digging deeply into the politico-social nature of language Wars in America.

How the H-E-Double-Hockey-Stick anyone could make a review of a dictionary so immensely funny, human, and profound is beyond me.

Well, I mean, it was beyond me, until DFW went and did it.

The most interesting bit to me, so far, is his exploration of the differences between what he calls SWE (Standard Written English) and the varieties of other English that are spoken in this country. While DFW is unarguably a master of SWE, he acknowledges that "we might just as well call [it] 'Standard White English' because it was developed by white people and is used by white people, especially educated, powerful white people" to (he says elsewhere) prop up the structures that keep them in power.

If you're a philologist or a serious postmodern philosopher, this is old news. Hey, look! Rich White Men are using power to get more power!

But I think even the most culturally-aware, word-obsessed braniacs would find DFW's exploration of the topic illuminating, interesting, and (at the very least) pretty frickin' hilarious. 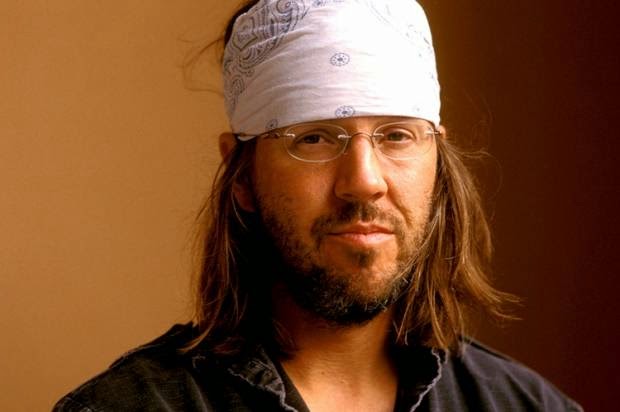 What's so great about DFW is that he understands that the purpose of writing is to communicate, and that the baseline requirement for accomplishing this communication is to be courteous to your reader. So even if, like me, you pick up his stuff and the dude's brain makes you feel stupid-by-comparison, you nonetheless feel like you're communing with a writer who'll meet you where you are—often by making himself the butt of the joke. Eg. the way he refers, often, to the way his childhood education in "proper" English resulted directly in a series of quadruple-wedgies.

Language is a gift.
It is an opportunity.

It can be used to alienate—to fabricate an Us-Them-dichotomy-of-exclusion—or it can be inclusive. In his dictionary-review, David Foster Wallace pokes all sorts of holes in the various ways people use language to be brutally exclusive... writing or speaking directly out of their fear, in an effort to consolidate their power by means of words.

I don't know how clear, kind, humble, and hospitable my own writing style is, but DFW is an inspiration to make it better. To become first a better person, then a better writer.

So with that I say "prisencolinensinainciusol," and wish you all a very good night.

[types off into the sunset, firing word-blanks at the deep-orange sky]
Labels: writing