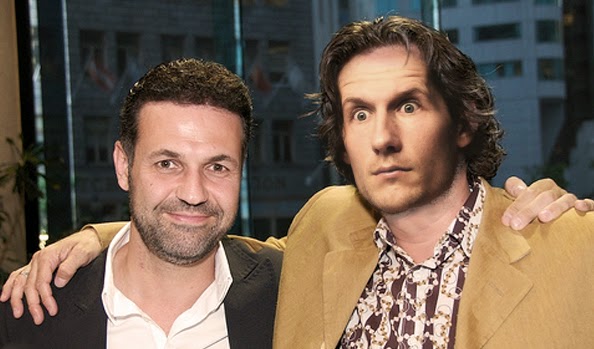 So, Khaled Hosseini and I are friends. Pretty much besties.

Which is cool, because I'm a writer and you know what? He is, too. He wrote such lovely books as The Kite Runner and A Thousand Splendid Suns and so on and awesomeforth, because they're bestsellers and one's been made into a movie and oh-my-gosh, did I mention we're friends?

Which is to say, I was just notified on goodreads that "Khaled became your friend," because yessiree-bob, he seems to have clicked the button that will allow me to - GASP - see what sort of books he's been reading/reviewing on goodreads. And vice-versa.

Let me digress from the point of all this before I've quite gotten to it (pre-gress?) and say that if you've not read anything by Khaled Hosseini, you should go rectify that right now. Seriously. Turn off your television with your Afghanistan News and your Afghanistan War and your Kabul this and Kabul that and just read the man's stories, because they will open your eyes to an Afghanistan you're not ever going to see without taking the time to micro-picture it, through an individual story.

It may seem counter-intuitively weird, but I think you never really know anything or anyplace on a broader scale until you slow down long enough to train your magnifying glass on the metaphorical "ant" of the situation (but, like, not in direct sunlight. because that's cruel).

Speaking of micro-stories, did I mention Khaled Hosseini and I are now friends on goodreads?

Which, yes, okay, is pretty much not really a friendship, and also ironic because he and I are writers and therefore people who love words, and probably neither of us wants to see an important word like "friend" get eroded by internetting.

But there it is.

Which means I'm now pretty much an Afghanistan War expert and a fount of all Afghanistan News and the most cultured, connected person you know.

Let me tell you about Kabul.

Here's the thing, though. Friendships aren't suppose to be about me.
They're supposed to be about "us."

Friendship is a slippery concept, though, so as I approach a Thousand Splendid Facebook Friends (970 and counting), I think I'd like to take a moment and loudly proclaim that while I may feel like I've gotta be online-engaged in a fake-friendship kind of way in order to be a writer in today's world, well... I don't have to like it.

I like that last night I hosted another Barkey-Q, which is like a barbecue except that it's held at the Barkey house and sometimes involves a bonfire, except not last night because stupidraingodsmuttermuttermutter.

Anyway, the term Barkey-Q was invented by one of my former students and, fittingly, last night's event was attended primarily by former students, some of whom drove like an hour to get here, bringing potluck-type food and some fresh life-stories.

Like Jon, who ermegersh just got that Internship at Google he'd been hoping for, after writing some sort of headhunter-magnet app-thing this past year.

Or Lane-the-Harvard-student, who has a hurdy-gurdy and recently met some random, probably-homeless, Boston-wandering hurdy-gurdy player who spent an afternoon teaching him a bunch of stuff and then said Lane should just pay him "in weed."

Or Carly-the-brilliant-photographer, who now has a strip of light-violet hair and in her six weeks off from art school for Christmas went to New York and was fabulous.

Or Emily-the-dancer-and-also-great-photographer, whose uncle thinks her name's spelled Emileigh because she changed it on Facebook and then it wouldn't let her change it back.

Or Taylor, who brought his pretty girlfriend and came early to show me a bunch of stuff he's learning as a business/marketing student in Wilmington, which accounts for why I wrote the words "Afghanistan News" and "Afghanistan War" and "Kabul" a bunch of times, because keyword-planner.

Or how about all the other little story-pieces, from all the others? The story-pieces that are the bits that make up real friendship. And even though these former students are all off studying elsewhere and I only rarely ever see them, these pieces are big enough and have enough history attached to them that I don't feel at all dirty tying them up together, in a bundle labeled "friend."

The problem with me and Khaled Hosseini (and many of my 970 facebookers) is that the pieces are just too dang small. There aren't enough of them, and calling their sum-total "friend" just doesn't feel right. In the case of Hosseini, for example, they consist entirely of one little note from me, and a mouse-click from him.*

There's no real remedy for this, I think.

First, because it's a living language and even if I myself check out of the online-stupidity, everybody else is gonna just keep on facebooking and eroding and facebooking some more, until "friend" means something bland and pointless, like "nice" (which is currently pretty much the nastiest word in the English language).

But second, because forced-definition-compliance is a very non-friendly thing to do, and even though I think Mark Zuckerberg's done a nasty thing to a beautiful word, those of us who aren't barking mad still do know, deep down, what a real friend is.

We may not have a word for it, but we know it when we see it.

Furthermore, one of the things that has always made "friend" such a beautiful word is its porousness. True friendship is about openness. About possibility.

So even if Mr. Hosseini and I are not yet really friends, in the truest sense of the word... who knows? One day we might be.

*Because of course we can't count the hours I've spent reading Khaled Hosseini's books, because he and I weren't "friends" back then. Even though he did give me all that Afghanistan News about the Afghanistan War, and Kabul, and mwah-ha-hah!
Labels: relationships