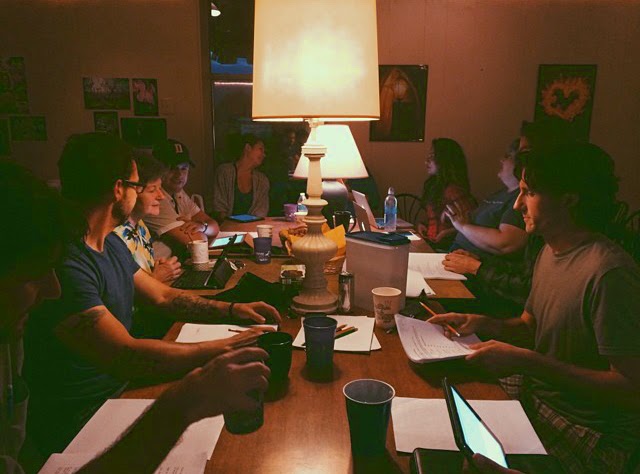 Last night we staged a table read for a feature-length script I wrote called GINSENG, and it was the sort of experience one yearns for as a writer.

Everybody loved it. They told me it was awesome - that I was awesome. An actor politely inquired as to whom he should kill in order to secure a role, once we go into production.

I tell you this, of course, to toot my own horn. This is the internet, after all.

That was also the absolute worst outcome for a table read, because the whole point of a table read is to let you know what isn't working as well as it could. It's great to hear that people resonated with something I wrote to the point where their brain did that thing brains do and skipped over some of the problems that might have bubbled to the surface on the fourth or fifth reading... but I also needed criticism. Fortunately there were a few dissonant voices (from those who also loved it - because this is still the internet), and today I've been  cogitating through the things those voices said... and also arguing with the director over which of them were insane, and which were genius nuggets of genius.

Because as much as I absolutely hate to believe that there's ever anything wrong with any of my drafts, ever, there always is. A lot.

It is a very, very hard thing to admit that other people can see my baby more clearly than I. It's much easier to get defensive and assume it's jealousy or bad faith or indigestion that's making them act like such jerks. This is very rarely the case. Most of the time, they just want to help. And while they're quite often (Always?) wrong in their suggestions for how to make the story better, they're still usually right about the things that aren't working (Or at least, the qualms they have are signposts to what is actually wrong).

Well... since you asked:

You are not perfect. You're also amazing at hiding your imperfections from yourself. But if you hide yourself away and never let anyone see the real you and speak the truth to you about where you're falling short, then you'll never have the opportunity to identify what needs work, and then do the work that will free you to get better.

Criticism sucks, but it's the only way to grow.

So find good people you can trust. Share yourself openly with them, inviting their creative criticism. Then do your best to set aside your knee-jerk, self-defensive reaction. Listen deeply to what they are saying about and to you, and realize that the things they are talking about are not YOU. They're a part of you, sure, but they're a malleable part. You can change them. And while these people are often going to be wrong about what they think is going on, you can still learn from them.

If they don't have any criticisms to offer - if they think you're great the way you are - then be grateful for that! Maybe they don't know you all that well, or maybe they do but they're not zoning in on your weaknesses. That's fine. You need people like that in your life, too.

We're all fragile.
We're all fighting a difficult battle.

But one way to fight it well is to open yourself up to criticism.

Whazzat? You really enjoyed this post? Well, perhaps if you share it on your social internets, then someone you know will enjoy it, too.


Or maybe support my writing habit with one of the options at the top of the sidebar to the right. Like, by grabbing a copy of my short story collection. Or picking an option and paying for a custom blog post. -->

*NOTE: The above-pasted photo was taken by director Ben Joyner, and I'm using it here completely without his permission (or the permission of anyone in the photo). But that's okay because I'm the writer and I own the story which means I have all the power mwah-ha-ha-ha-haaaaaa (degenerates into maniacal laughter).
Labels: film identity writing