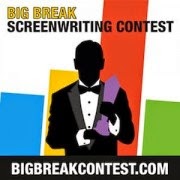 In yet another installment of my 2014 "always a bridesmaid, never a bride" saga, my feature-length script POUNDERS has made quarterfinalist in the drama category of the Big Break Screenwriting Contest.

Well, I guess I could still be a bride on this one, since they won't announce semifinalists until the end of October. This was a more recent contest and I submitted an updated draft... so who knows? But given my results thus far (and my brooding, pessimistic nature), I'm going to go ahead and assume the worst.

It's still a lovely thing to be acknowledged in some way, and in this case making the quarterfinals puts POUNDERS in the top ten percent of nearly seven thousand entries. So YAY for POUNDERS, and YAY for another shot at catching that elusive bouquet.

I spent WAY too much money on contests in 2014, and I shan't be doing that again. But I will be entering my latest script, GINSENG, which is about thirteen points more awesomer on the awesome scale than anything I shot out there, last year.