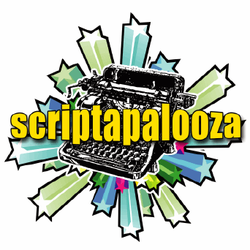 Yesterday I got word that my script PINK is a quarterfinalist in the Scriptapalooza screenplay competition. PINK is a dark comedy about a guy named Pink, a tormented artist under house arrest who has just three days left in his tracking anklet when a friend stashes a backpack full of stolen drugs in his home. I wrote PINK for my director-friend Austin Herring, to be shot for a super-mini-micro budget at his dad's house, and mine.

While contests are kind of silly and arbitrary and not worth much, career-wise, unless you actually win, I'm especially happy that PINK has advanced in this one.

See, I've had three scripts I've sent out to contests this past year: FOUNDER, POUNDERS, and PINK:

That left poor ol' PINK without any contest love. Until yesterday.

The other reason this makes me happy is that I'm a vindictive little monster of a person, and I mostly just want to show up the anonymous reviewer on the Blacklist script-website-thingy I submitted PINK to last year, who rated it a three-out-of-ten. Given that another anonymous reviewer on the same website had previously rated my very first (and pretty horrifically written) script a six-out-of-ten, the three-out-of-ten for my much more recent, better-written script struck me as a ludicrous Crime Against Humanity.