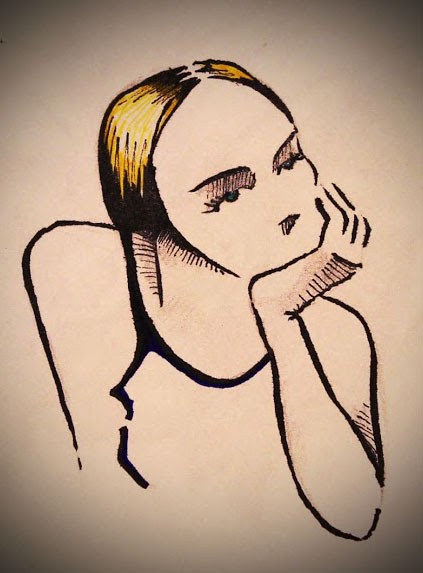 I was raised in the Amazon basin.

Perhaps because of the crazy humidity, the women and girls I grew up around didn't wear much makeup, if any. I think there was maybe one girl in the high school who had a couple shelves full of "beauty products" ...and the rest of us tended to think that was a bit weird.

So, the American Makeup Obsession was a bit of a shock.

The first week back after I graduated from high school, my long-time Florida-buddy Ben and I took a little day trip out to the beach from Orlando, in a car jam-packed full of teenagers. We were young and immortal, and when we got there I reckoned I had never seen so little bathing suit fabric on a group of girls my own age.

Or so. much. makeup.

I remember thinking this one girl was super-pretty, and that it was a shame I couldn't see what she actually looked like under her pancaked face. I've never been all that bright about what I should or shouldn't say to a woman, so I opened my mouth and told her as much.

She said I wouldn't think that if I saw her without makeup, so I (stupidly) tried to argue with her. "You're so pretty... I'd love you without makeup..." Et cetera.

I didn't account for the fact that I was arguing against an entire culture's worth of pressure.

I didn't account for the fact that a woman who usually wears makeup can't go out in public au natural without pretty much everybody she knows asking her if she's sick, or tired (leading her to believe, of course, that her natural face looks sick, and tired).

And the woman I'm currently seeing has told me that plenty of men claim they "prefer a woman who doesn't wear makeup," and then recoil when a woman actually risks it.

That's not me, but still... To live with that pressure?

There's just no way I could understand what it feels like to be told from childhood that the face you were born with has to be "embellished," or it won't be attractive to anybody. I'm just a guy living and writing in a shed in the woods, sometimes not even bothering to put pants on until mid-day (if at all). Who am I to judge anyone else's experience - especially a woman's?

I do feel that women are being manipulated, though.

I do think I may be right in suspecting that the argument many women make - that makeup is their form of creative expression - is a bit of careful self-delusion. There is no slave quite so wonderful as one who believes she is doing it of her own free will, and the bajillion-dollar cosmetics industry is happy to promote the Creative-Expression myth all day long.

So I sometimes wish women would rise up together and say, with one voice, "Bollocks!"

Which is why I'm absolutely LOVING this music video for the song "Try," by Colbie Caillat, a musician who apparently got fed up with seeing all her promo-pictures photoshopped, and with getting so much pressure from so many people to perpetually modify herself for her supposedly-judgy audience.

Because now it's not just some random, pants-less guy you probably shouldn't quite trust saying it. It's a beautiful, career-successful woman, telling other women that it's okay to just be themselves.

Take your makeup off.
Let your hair down.
Take a breath.
Look into the mirror, at yourself.
Don't you like you?
Cause I like you.

It'll take a while to re-wire our culture and our minds. But there's no reason that half our population has to go on propping up a predatory, fear-mongering "beauty" industry.

Go ahead, ladies. Comments are open. Tell me I'm an idiot :-)

Whazzat? You say you really liked this blog post? Share it on your social internets then, already!

Or maybe support my writing habit with one of the options at the top of the sidebar to the right. Like, by grabbing a copy of my short story collection. Or picking an option and paying for a custom blog post. Cheerios, Josh. -->
Labels: consumerism identity