The only personality test I've ever taken (the enneagram) taught me that I believe deep down that while there may be such a thing as unconditional love in the world, there isn't enough for me. I'm not sure how I came to believe this lie, but as a result I've spent a lot of time trying to adapt myself to what I believe other people want from me. In fact, one reason I write this blog is so that you'll like me.

Actually, I have five Testicle Stories that I like to tell. They are:
They're great stories, and perhaps one day I'll tell you all of them. But today's story is the last one: True Testicle Story Number Five. 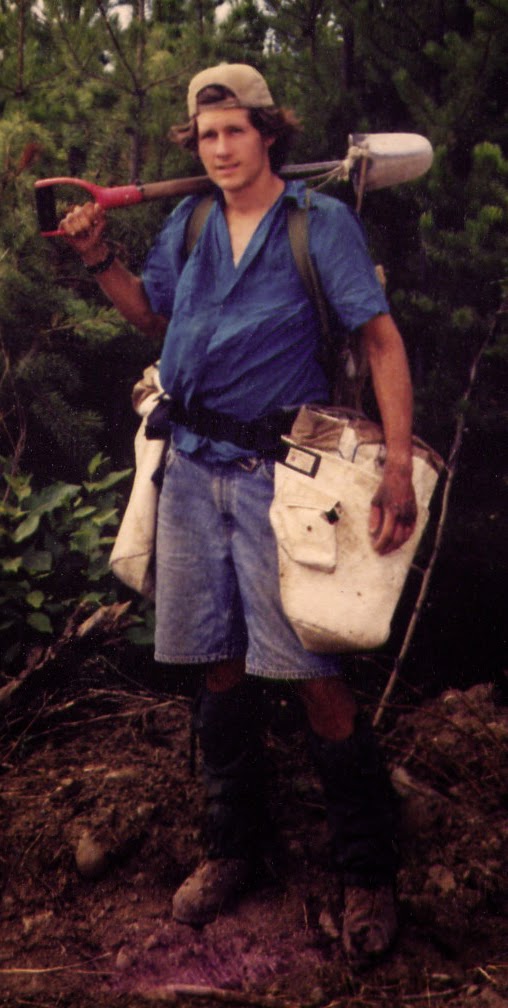 The summer of 2001 was my last summer as a full-time treeplanter before becoming a foreman. I was planting for a company called NATA, and one morning I found myself in the dinner line next to one of the owners of the company, who I will call Tough Ardell (as opposed to Nerdy Ardell, his brother - the other half of the unofficial acronym). Tough Ardell reminded me of Ron Howard. He was tall, cool, and charismatic. So naturally, I wanted him to like me.

As we stood there holding our trays, Tough Ardell turned to me and said, "So, Josh... how's everything going for you this season?"

That seemed as good an invitation for a monologue as any, so I set my tray down and said, "Well, I'll tell ya. Everything is great. The land is great. The tree prices are great. I've got great friends out here. The food is fantastic. Heck, even the weather's been great. Which is precisely what I'm so worried about."

"I just get suspicious," I said. "I mean, with all these great things happening, I just think to myself, 'Something awful's just bound to be sneaking up on me right now, to wreck all of this fun.' "

He laughed (a little uncomfortably).

I balled my hand up into a fist

I reached my fist up into the sky

"And I PUNCH myself in the balls."

Let me assure you that this is in fact a true story, and that I did in fact then punch myself in the testicles. Hard. Harder, in fact, than I thought it was possible to punch yourself anywhere, let alone the family jewels. I mean, isn't there some sort of self-preservation instinct that'll make you pull that punch at the last moment?

I fell to the floor, writhing in pain. Tough Ardell, of course, nearly urinated all over himself with laughter. As did everyone else in the cook tent.

On the last two days of that planting season I pounded in five hundred dollars worth of trees a day, earning a thousand bucks for sixteen hours of work. A herculean feat? Absolutely.

The one for which I'll be remembered? No. Of course not.

I'll forever be remembered as the guy who punched himself in the nuts.

Because there were zero lengths I would not go to to get someone to like me. Because I really didn't like myself. And because somewhere deep down I believed the lie that that if things were going well for me, it was only because a God-sized fist was about to punch me in the metaphorical gonads.

Life is indeed hard, a lot of the time. So I think you need to be able to enjoy the good things while they're there. It's those joys, really, that can get you through the moments when you're writhing in pain on the muddy floor of the cook tent while everyone laughs at you.

If you loved this thing that I have written, please feel free to do me a solid and share it on your social internets (there's a panel of buttons down below). Oh, and you could always pick up a copy of my treeplanting novel, POUNDERS, if you feel like being extra awesome.
Labels: humor identity