a thousand-word picture that could change your life... forever

Since the dawn of time, the internet has functioned mostly as a tool for disseminating lies, pornography, and pictures of cats. Its secondary function has of course been the political polarization of the populace through the aforementioned lie-dissemination. But a third and much less prevalent function of the internet is the sharing of wisdom. 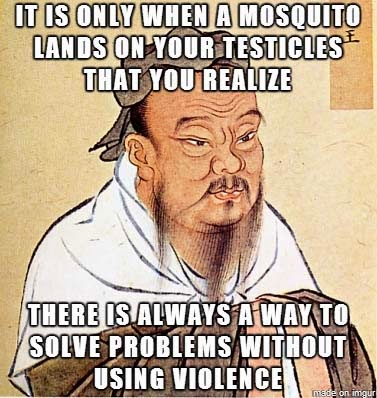 Take, for example, this picture my middle school P.E. teacher just posted on the facebooks. Doug, as I'll call him, was always a bit of a straight-shooter, and had a profound impact on a lot of us for his ability to both meet us where we were, and to bring a bawdy wisdom that could not be ignored (mostly because he was a big man who carried a "dodge" ball).

This bit of ancient Chinese wisdom he posted was no exception. I mean, I'm tempted to blather on in great detail, expanding on the themes of this little picture. I could talk about how it reveals that violence is essentially a failure to place a high enough value on what might potentially be damaged or destroyed by it; and that if only that potential destruction really mattered enough to us, we would be much more hesitant to pick up an instrument of violence to "solve" our problems. I could talk about how the picture shows how violence is a failure of imagination and a failure of empathy, and that the escalation it engenders is as inevitable as we are willing to open our eyes to see. I could also say something about everything being a question of perspective, and how I hate guns with a bloody, purple passion, and maybe even extrapolate all that out into a comment on the fallacy of always attempting to divide the world into "black hats" and "white hats."

I could, of course, say those things. But why bother when this one, simple image already says it all?
Labels: war