The first play I was ever in was a Christmas musical. I was a pipsqueak wise man with a fake-deep voice and falling-down pants. Everybody laughed, and it wasn't because it was a comedy. It was a disaster. I did a bunch of musicals after that (my mom was usually the director), and I think I pretty much always felt like my pants were falling down.

My first real dramatic role was in a fifth-grade play about dental hygiene. I played a dentist. I had a little mirror-on-a-stick, and I was probably awesome. I don't remember, because it, too, was a traumatic experience. As was my role as King Theseus in A Midsummer Night's Dream, as Dr. Chumley in Harvey, and as something else in an Arthurian thing I seem to have blocked out completely. That blockage makes sense to me, given that every time I had to get up in front of people to act, I ended up with a bad case of the sweat/chill/spews.

In college I took a couple semesters of drama, and even though it was terrifying, I had a bit more fun with it.

"Your Australian accent was awesome!" my classmates said.

"I told you not to do accents," my teacher said, and she gave me a B.

I hate acting, I thought.

Later, she assigned me a "kissing scene" with a girl I wasn't all that into. She told us we didn't have to actually do the kiss, and since at that point in my life I'd not yet kissed a girl... I ignored my scene-partner's eager entreaties and passed on the big smooch-moment.

"I'd hoped you'd be more committed," my teacher said, and she gave me a B-.

When I handed in my first review of the first play we had to attend for class, my teacher took me aside and told me that I was a really good writer, and I ought to consider maybe a career as a critic. What I heard her say was that I was a terrible actor, and that I should consider hyperventilating and passing out for the duration after our next set of warm-up exercises.

I hate critics, I thought. And acting. And myself.

At first, I internalized all this to mean that I was an inherently terrible actor. But later in life, when I'd decided I wasn't inherently anything (just too thin-skinned to suffer the indignities of acting) I figured it meant I should try something else. Maybe writing, you know?

Because writers never get rejected, or told they suck. Right.

I love actors. I'm fascinated by these magical creatures. I've found them to be intelligent and creative and oh-so bizarre. They're this weird, un-hinged hall of mirrors, and I've loved seeing how they've taken my words and added shades of meaning to them that I never could have imagined.

And then there was this: 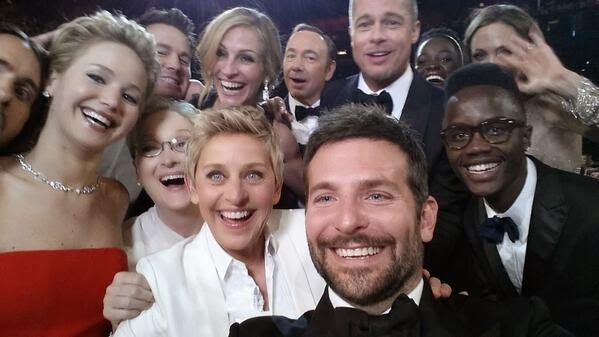 This, if you've not heard, is a little Bradley Cooper selfie that Ellen Degeneres posted on twitter yesterday. It got nearly two million re-tweets pretty much immediately, and apparently broke twitter. Because actors.

Look -- a picture of actors! They're all so beautiful and glamorous and special! Like wonderful little daylight-sparkle-vampires in some vomitous teen blockbuster! They're so happy and vibrant and alive! I just wanna lick em!

I'm not bitter about this. I'm not. Okay, fine... maybe a little. But we live in a topsy-turvy world, and wonky money-dispersion has always been one of the best indicators of that insanity.

Can I be perfectly frank with you, though? It's impossible to not be just a little bit worried about the way everybody treats actors. About fifty thousand dollars an hour. About two million retweets in an evening. Because each of those actors in each of those movies at the Oscars was a paid performer, acting out stories that were initially created by a group of people almost universally-neglected when it came time to say "thank you" up on stage at the most glamorous, hyped-up awards show of the year. 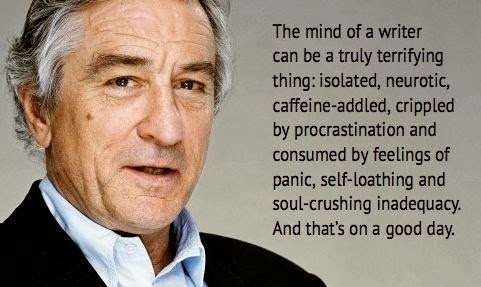 That's right... the writers. And even though I tend to think (along with most real creatives) that the concept of an awards show for "best art anything" is more than a little bit silly... I still believe that if you've simply got to have one, then it might possibly be worth giving a little more credit to the people who's brain-babies these movies really are.

Don't get me wrong... it's not the actor's fault our culture is structured this way. In my experience, good actors love and crave good writing like milk from their mommas' teats. They know that without good stories to tell, they're just good-looking people standing in a room. They also know that good stories are hard to come by, and they are extremely grateful when they feel you've come up with one for them to play with. They're curious about how you did it, and interested in you as a storyteller.

While they're just as likely as writers and musicians to float off into the hinterlands of their minds and forget you (they're usually introverts), they nonetheless tend to make an effort to be friendly. They can't just whip up a new movie in their home-studio and put it out on the internet, so they tend to be good about staying in touch -- with you, and with their humanity. They know that movies are a group effort, and even though they'll take the crazy-money that's given to them as the figureheads, they're still pretty cool about remembering the little people.

And also, they're ridiculously pretty to look at.

So I love actors, and I want them to love my work. I want that desperately, because the only factor that might be more important in getting one of my scripts made into a movie after having a director enthusiastically attached is getting a good actor on board. And if they're famous...? Woo--eee!

Getting respected character actor Nick Searcy to sign on last summer for my short film LOCKER 212 was a major coup, and probably what got us the budget we needed to make it a reality. So I do understand that good, well-known actors bring out an audience.

It's not just their talent -- it's the fact that when audiences see a known entity on the playbill, they're comforted by the familiarity of a previously-enjoyable experience they've had with that actor. I get it. I sometimes watch movies for the same reason. Every since Brad Pitt made me feel cool-by-proxy in Fight Club, I'll watch anything and everything he ever does, just because he does it. He's a pretty hunk of man-meat and a great actor, and I don't mind saying it.

I worry about the way we gush, and retweet, and don't bat an eye at insane money. I worry because I remember that these are real people, people with holes and hurts in them. I tend to think that all the adulation does them a disservice. I don't think they look at that retweeted picture and giddily fall before the throne of their combined awesomeness.

I think they see that picture for what it is -- a fun memory of a fun night with a group of humans with egos and foibles and failings.

I think they probably hear about two million retweets in a day and they think, "Oh my God! What kind of an idiot country are we living in?! Can't they see we're just people? Don't they know the world is full of seven billion of us, and that we're no more worthy of worship than the ones being shot in the streets in Venezuela, or Ukraine, or Syria? Than the children starving to death slowly every. single. day!?!"

At least, I like to think so, because I worry what the insanity of it will do to them if they buy into the lie we're all trying to sell them.

And I love actors.

- - -
A FINAL NOTE: Good writing isn't magic. It's hard work, and the greatest reward for that work is to share it with others. So if you enjoyed this little (ad-free) piece of my brain... please share the love on your social internets. And pick up a copy of my Short Story Collection, whilst you're at it. You can get it as an ebook for less than a fancy cuppa coffee, and it'll last waaay longer.
Labels: acting film humor